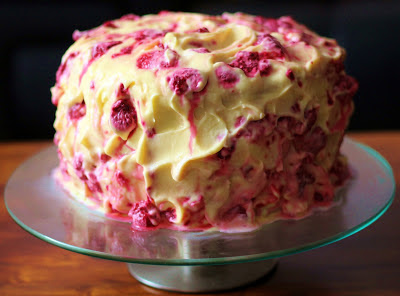 I have the memory of a goldfish.  Honestly, I remember and retain next to nothing, whether it’s the plots of books I’ve read or what I did on the weekend or what’s going on in current affairs.  The worst is when it comes to holidays.  Ask me for recommendations on where to stay, places to eat, the best ways to get around any of the places I’ve been to in my life and I will prove about as useful as a chocolate teapot.  I just never remember. 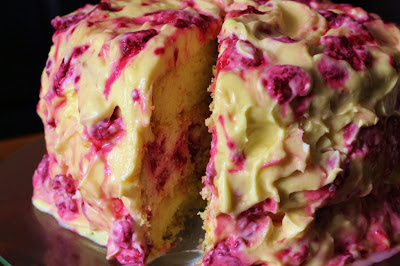 Don’t get me wrong, I’m not totally senile - at least, not yet - but what I do recall is the useless stuff - things that are of no help whatsoever to anyone.  For instance, years ago I went on a family holiday to Istanbul.  I remember nothing of the Blue Mosque or Hagia Sophia, nothing of the hotel I stayed at or restaurants I dined in.  No, the single memory I have of this trip is of a local man randomly jumping out in front of my family and me on the street and shouting "Yes, I am here!" in a thick Turkish accent, at which point we all collapsed into giggles.  Now I’ll admit, I take delight in continuing the stranger’s legacy by occasionally jumping out in front of my siblings announcing, “Yes, I am here!” (I know, I’m not normal, but we established this long ago I’m sure), but other than it providing me with immense juvenile amusement, I think we can all agree that this memory is not going to be of any use to anyone in any way, shape or form.  Ever. 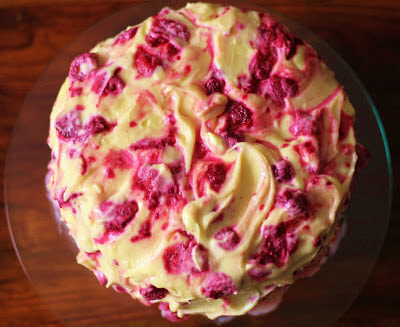 Last month I was on holiday in Puerto Rico, and like Istanbul, my memories of it are already fading fast.  The things that will stay with me are (yes, you guessed it) the weird, of-no-help-to-anyone things, for example, a surreal conversation with a random stranger who told me he’d seen the face of God and that I had the same face (apparently it’s the eyes and nose.  Err, right), and eating rice and beans flavour ice cream (an acquired taste)!

The other thing that made a lasting impression on me in Puerto Rico was the extent to which American culture and influence seems to have permeated the whole place.  Perhaps not surprising given the island is a US territory.  See, not a particularly useful memory, and yet it has served at least one good purpose: when I came home, I decided my next cake would be an ode to American influence, something super-sized, over-the-top, yet addictive and irresistible.  Thus was my raspberry ripple and lemon cheesecake cake born. 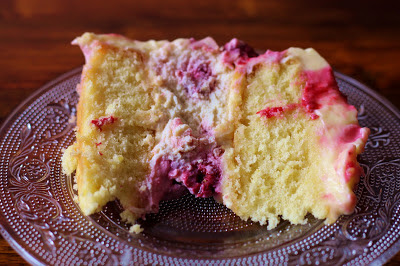 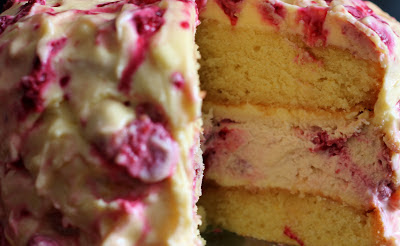 For the baked raspberry cheesecake (cheesecake adapted from BBC GoodFood):


For the lemon sponge cake:


For the cream cheese frosting:
To make the cheesecake

Ideally you need to make the cheesecake layer one day ahead and then stick it in the freezer overnight, but if you can’t, just make sure you make it before you start on the sponge and frosting and then freeze it for 4-5 hours before assembling the whole cake.

Preheat the oven to 180C and grease the sides and base of a deep 8” round tin.  Then line the base of the tin with greaseproof paper and place the tin onto a baking sheet.

Place the cream cheese in a bowl and beat on a medium-low speed, preferably with a paddle attachment/K-beater, for a few minutes until smooth.

Add the flour and sugar and continue to beat on medium-low for a couple of minutes, stopping twice in between to scrape down the sides of the bowl.

Add the vanilla, eggs and yolk, and the soured cream and beat together until you have a smooth, light mixture.  Again, stop to scrape down the sides once or twice between beating.

Stir in the raspberries (straight from the freezer if using frozen) and then pour the batter into your tin.

After the 40 minutes (the cheesecake will still have a wobble but do not over-bake it!), turn the oven off and open the door slightly but leave the cheesecake inside for 2 hours or until it’s completely cold.  This will allow the cheesecake to set and to become even creamier.

Once the cheesecake is set and cooled, place it in the freezer overnight (or a minimum of 4-5 hours), until you are ready to assemble the whole cake.


To make the lemon sponge cake

Pre-heat oven to 180C (or 160C for a fan oven), grease the sides and bases of two 8” round sandwich tins and line the bases with greaseproof paper.

In a deep bowl, vigorously beat together the butter/Stork and sugar until pale and creamy (use a K-beater if using a freestanding mixer), then add the lightly beaten eggs, slowly mixing through.

Sift the flour and baking powder together three times, before adding a third to the batter.  Once incorporated, add another third, slowly beat in again and then add the remaining third.

Once all the flour is incorporated, add the lemon zest and mix until well combined before spooning the mixture evenly into your two tins.

Place the tins on the middle shelf of the oven (this helps the cakes to rise evenly rather than with a domed top) and bake for 20-25 minutes or until a thin skewer inserted into the centre of the cakes comes out clean.

While the cakes are baking, mix together the lemon juice and sugar to make a drizzle.

As soon as the cakes are out of the oven, prick them all over with a skewer or sharp knife, then pour the drizzle equally over both cakes, leaving to cool and for the juice to sink in.

To make the frosting

In a bowl, beat the butter/Stork for 4-5 minutes on a medium-high speed (use a K-beater if using a freestanding mixer).

Add the cream cheese and beat for another 2 minutes.

Sift the icing sugar into the butter and cheese mixture, add the vanilla extract and then beat again for 2 minutes.

Break the white chocolate into pieces into a bowl and melt gently, either over a bain marie (set the bowl of chocolate over a pan of simmering water, making sure the bottom of the bowl does not come into contact with the water.  Stir the chocolate slowly.  Remove from the heat once it has melted) or in the microwave, then pour it into the cream cheese frosting and give one final quick beat to incorporate.

Refrigerate until you’re ready to assemble the cake.

The raspberries mixed with the icing sugar will be used once the cake has been assembled and frosted.

To assemble and frost the cake

Place one of the lemon sponge cake layers onto your cake plate and use a palette knife or spatula to spread a thin layer of the cream cheese frosting over the top.

Next, remove the cheesecake layer from the freezer and gently place it on top of the iced sponge layer.

At this point you need to crumb coat the cake.  This simply means spreading a thin layer of the cream cheese frosting first over the top of the cake and then all around the sides, using a palette knife or spatula.  Once you’ve done this crumb coat, refrigerate the cake for 30 minutes to an hour, allowing the frosting to set and any loose crumbs on the cake to set within it.

Remove the cake from the fridge once the crumb coat has set and ice with the remaining frosting, starting with the top of the cake and then working all the way around the edge.  Don't worry about it being neat and smooth, a swirly pattern is what you'll be aiming for at the end anyway.

Finally, dot the gently crushed raspberries around the top and side of the cake and using your palette knife, swirl them into the frosting to create a pretty pattern.

Once assembled, store the cake in the fridge overnight – the cheesecake will be even creamier and the sponge even more moist the next day!
Posted by acupofteasolveseverything at 21:35