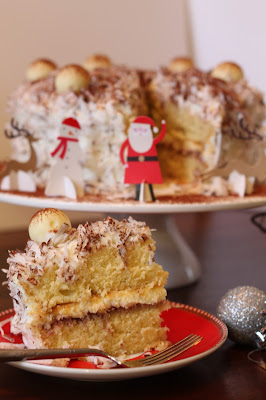 Looking back on previous posts, I've realised that I've written several times about my love of Christmas. So many times, that I probably shouldn't be writing about it again. But it's December and I just can't seem to help myself, because I'm like a child when it comes to Christmas. Okay wait, I'm like a child most of the time, but with Christmas my inner five year-old truly comes out to play. I absolutely love this time of year and for 2015 I'm more excited than ever because it's my first true Christmas and my first one with my husband! 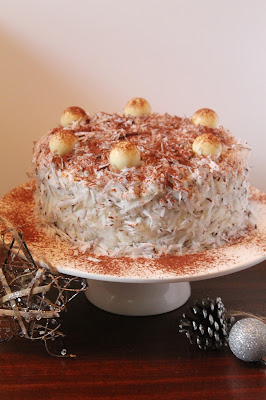 To that end, I've gone all out: I've insisted on advent calendars (again, a first for me); I've never had a tree before so to make up for it we have two, under which there is a growing pile of presents; and of course, my Elf DVD has made its annual appearance (the jokes have me in fits of giggles every single time). You'd be forgiven for thinking there is an actual child in our house, not simply a grown-up unable to stop acting like one.

Still, I don't give a fudge; I refuse to be an apologist for my all-embracing love of Christmas films, songs, jumpers, crackers, decorations and all-round Christmas cheer. Why? Well, quite simply because it makes me happy. 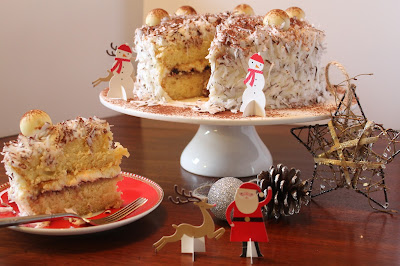 This cake, although not particularly Christmassy in flavour, for me very much looks the part with its snow-white layer of smooth mascarpone frosting, topped with brilliantly white flakes of fresh coconut. And although there are no Christmas spices or mincemeat etc., in it, it really is a deliciously comforting cake to partake in a slab of (avec cup of chai!), after a long day of Christmas shopping. The sponge is light and moist and the clotted cream and jam filling decadently and joyously soothing on a cold day.

Note that the first time I made this cake, inspired by the blog Mostly About Chocolate, I placed the clotted cream in the cake batter, as a direct substitute for butter. I also added chocolate chunks into the batter. I found however that the clotted cream made the cake crumb too tight and dense; and although I'd never admit this to anyone, for once I felt that chocolate seemed incongruous. 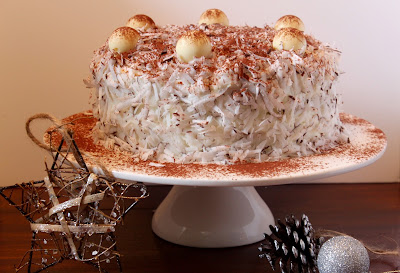 So I made the cake again, this time making my usual Vicky Sponge i.e. butter/margarine in the cake mix, not clotted cream, and omitting the chocolate altogether (treachery!) The clotted cream wasn't foregone completely. Instead I used it together with some lovely Bramble jam (a wonderful alternative to strawberry and raspberry jams) to sandwich my two sponges together before slathering on the coconut cream cheese frosting. Much better.
If you're concerned about my well-being after the chocolate omission, don't worry, I managed to crowbar some in in the form of some lovely Lindt balls on top for decoration. Party in my tummy! 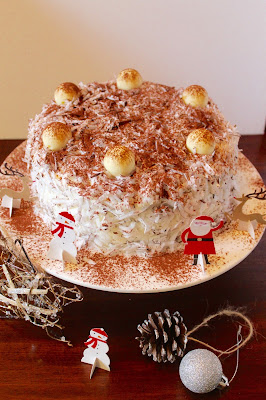 For the cake:
For the filling:

For the coconut frosting:

To make the cake, preheat the oven to 180C (or 160C for a fan oven). Grease and line two 8" sandwich tins.Cream together the butter and sugar until they are pale and fluffy.  If you're using a freestanding mixer, use your K-beater attachment and beat for a good few minutes until the butter and sugar are so light and airy, they resemble whipped cream.


Add the lightly beaten eggs and beat again briefly. The mixture may look lumpy and/or curdled, but adding flour in at the next stage will rectify this.

Sift the flour and baking powder together three times, then add a third to the butter, sugar and egg mix and beat to incorporate before adding another third, beating again, and then adding the final third and beating.

Lastly, add the vanilla extract and give your batter one final good mix before splitting equally between the two tins.

Bake in the oven for 20-22 minutes. To check the cakes are cooked, insert a clean knife into them; it should come out of the cakes with only moisture and a few crumbs on it. If there is gooey batter on the knife, give the cakes another two to three minutes in the oven.

Once baked, remove from the oven and allow the cakes to cool slightly before removing them from the tins and placing on a cooling rack.

To make the frosting, place all of your ingredients, except the grated coconut, into a bowl and beat together until smooth.

To assemble, place one of your cake sponges onto the plate you'll be serving the cake on. Using a palette knife, spread a generous amount of jam all over the top of it, followed by the clotted cream.

Place the second sponge, upside down, on top of the jam and clotted cream-covered sponge.

Dollop three or four tablespoons of the cream cheese frosting onto the top of the cake. Again using a palette knife, gently spread the frosting evenly over the top. Once this is done, spread more frosting around the side of the cake, working all the way around until it's all covered.

Finally, taking a small handful of grated coconut at a time, pat it onto the sides of the cake, pressing gently so that it sticks to the frosting. Once the side is all covered with coconut, sprinkle the remaining gratings over the top of the cake.

Decorate with Lindt balls and a dusting of cocoa powder if desired.
Posted by acupofteasolveseverything at 18:14 No comments: