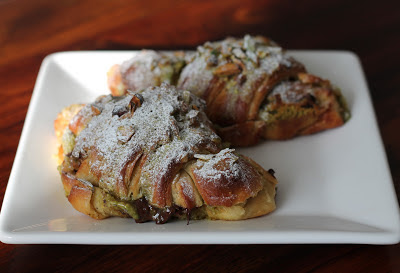 If I lived in China, it seems I would be labelled a ‘Leftover Woman’.  That's right, a leftover woman: a woman who is over the age of 27 and unwed.  According to an article in the BBC, the Chinese government stigmatises such women for being ‘so old’ and still unmarried, encouraging them to marry as quickly as possible because apparently, as one article published a couple of years ago by the Chinese media so kindly put it, “…as [unmarried] women age, they are worth less and less."  Gee, I feel so great about myself now!

Let’s be honest, such pressures on women to marry aren’t limited to just China.  Perhaps they are not so overt in other countries and cultures as to be stigmas that are actively promulgated by national governments, but they still exist.  Here in the Western world, no one thinks twice about referring to unmarried women rather unflatteringly as 'old maids', and even though I’m not aware of a term for it in my own Pakistani culture, I know only too well that a woman can be as educated and professionally successful as she pleases, but past the age of about 30 those successes matter little if she's not married. 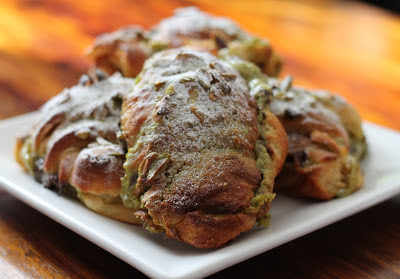 Don’t panic, this blog is not about to become a soapbox for my political or social views!  It’s still all about the cakeage I thank you, please, thank you very much!  What I would like to say though is: are leftovers always such a bad thing?  What about sandwiches made from leftover roast lamb or a breakfast of leftover pizza from the night before?  Be it leftover food or ‘leftover’ women, perhaps in both cases, its value is being underestimated?

Take these croissants. Formerly they were my Bourke Street Bakery croissants; delicious the day they were baked, fresh out of the oven, but as tends to happen with croissants, by day two, they’d gone stale.  And yet did I write them off as worthless?  No ma’am!  I took the stale ‘leftovers’, gave them a bit of tender loving care and look what happened, they transformed into by far the most delicious croissants I’ve ever eaten; even more decadent, buttery and yum-some than they had been the day before.  These twice-baked chocolate and pistachio croissants were in fact so delicious that a friend of mine beseeched me not to share the recipe on this blog and, instead, get rich from baking and selling these babies.  However - call me altruistic - I felt I just couldn’t deny you of them.  Once you’ve tried them, I think you’ll find yourself agreeing with me - sometimes not only do leftovers deserve a second chance, they can actually be far superior to their previous, ‘younger’ incarnations. 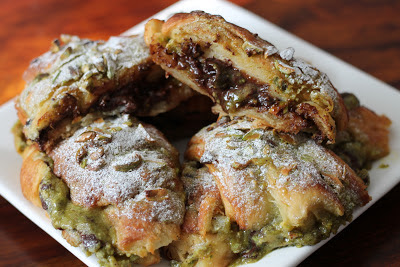 P.S. These croissants are rich (I found half a croissant was more than enough for me and I can pack away my cake!) so either share the love and/or run around the blocks a few times afterwards, okay?

P.P.S. You don't have to make your own croissants at home to make these; this recipe can be used just as easily with shop-bought croissants that remain uneaten the day after purchase.  They'll still be twice-baked - once by the producers and the second time by you! 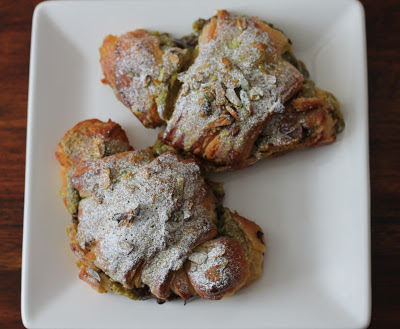 For the pistachio cream*:


*Both the syrup and the cream can be made a day in advance and kept in airtight containers in the fridge.

To make the syrup, combine the sugar and water in a small saucepan. Split your half of a vanilla pod with a sharp small knife and scrape the seeds into the sugar mixture, then add the pod into the mixture too.

Bring the mixture to a boil over a medium heat, stirring until the sugar is dissolved. Simmer for one minute, then remove from the heat and stir in the orange juice.

To make the pistachio cream, grind the sugar and pistachios (or ground almonds) together in a food processor until you have a fine sand-like consistency. Add the butter and mix until combined, then add the eggs one at a time until combined and the mixture is creamy (if making almond cream, add the extract at this point and stir through).

Slit the croissants in half horizontally, then dunk each half into the syrup and place the bottom halves onto your lined baking sheet.

Spread about 2 tbsp pistachio cream onto the bottom half of each croissant, then scatter a generous number of chocolate pieces over the cream.

Place the tops back onto the croissants and spread about 1 tbsp of the pistachio cream over each of the tops. Sprinkle the chopped pistachios on top.

Bake for 12-15 minutes, then transfer onto a cooling rack and dust generously with icing sugar.
Posted by acupofteasolveseverything at 20:31