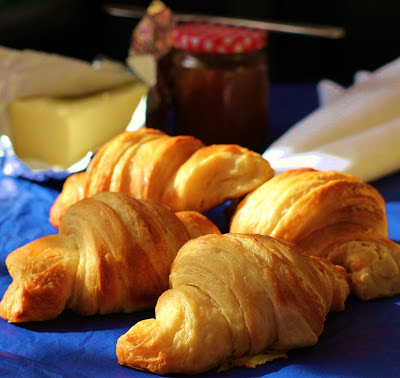 I have mentioned previously on this blog that as a student I was fortunate enough to spend a year living in Nice, in the south of France.  I shared a cosy little flat there, just a stone’s throw from the beach, with an English girl who seemed (to me at least) to have French men falling at her feet.  Not that I can blame them, she was lovely, with the added bonus of having  legs that went on for miles and glossy blonde hair, both of which always seem to help when it comes to the male of the species.  I, on the other hand, was, well I think it would be fair to say that I was still trying to outgrow the shyness and awkwardness I had acquired during my teens!  So whilst my flatmate would happily mingle at sophisticated soirees, practising her French with grownups who oozed Gallic elegance and swooned over her English accent, I was far more at ease improving my grasp of the language with the help of the two babbling eight-year old French girls I babysat, whiling away the hours watching inane French children’s programmes with them. 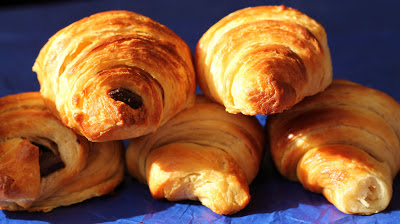 One ritual that my flatmate and I did share together though was our Sunday afternoons.  There was a little artisan bakery at the end of our street (just as there’s an artisan bakery down the end of pretty much every street in France), so each Sunday, my flatmate would mosey on down to the bakery and choose two of some kind of delectable French patisserie or viennoiserie for us to feast on: macarons, millefeuilles, tarte aux pommes, pain au chocolat, palmiers, or whatever else had just emerged freshly-baked from the oven.

Whilst I hope I have outgrown the awkward, shy young girl that I was in France (although to my dismay I am still neither leggy nor blonde), I know I will never outgrow my love of French pastries, so recently I thought I would try to recreate the deliciously flaky, buttery croissants that are so readily available there, yet seem to be such a precious commodity here in England.  After extensive research, I settled on a recipe by the Bourke Street Bakery (ironically, they’re Australian); it had received great reviews from fellow bloggers and, for someone who’s never made croissants before, the recipe looked straightforward enough. 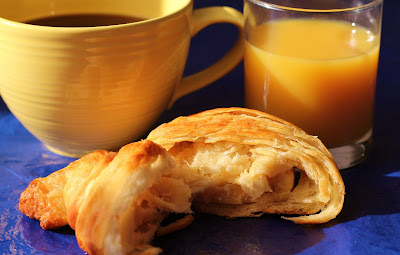 I can duly report back that the recipe is indeed straightforward and produces light, buttery, absolutely delicious croissants (I ate two in one sitting and would have eaten more had my waistline not spoilt the party).  BUT, I will just place this warning now to anyone who hasn’t made croissants before and is thinking about it: it’s a time-consuming process, so either make these when you have a lazy couple of days ahead, or clear your diary, because croissant-making is not conducive to being productive in any other aspect of your life!  (If baking over a weekend, I’ve given a rough guide for when you should carry out each step to have your croissants ready for Sunday brunch.)  It’s also an intense workout with all the kneading and rolling so be prepared for your arms to ache for days after (in my book this justifies being able to eat the croissants, plus just think of the biceps you will have – Madonna would be proud!)  Finally, if you’re anxious about the laminating process (rolling and folding the dough with the butter), there’s a great step-by-step photo guide on the fantastic blog, Butter Baking. 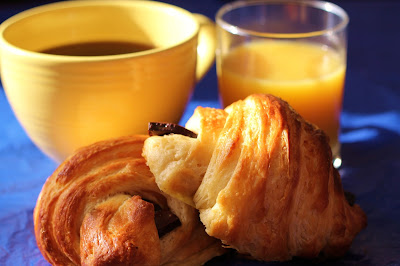 P.S. Croissants are always best eaten on the day they are made, but I find they still taste great reheated for five to 10 minutes in the oven the next day (at about 170C or 150C for a fan oven).  Alternatively, you could turn one day-old croissants into something different and uber-delicious by following my Croissants Part II recipe for Pain au chocolat aux pistaches (Twice-baked chocolate and pistachio croissants)! 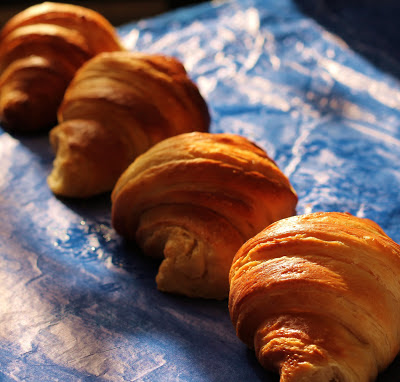 For the ferment (this is a small amount of dough that needs to be made first and will help your croissant dough develop and rise):
For the croissant dough (chill everything in the fridge before you start making the dough, including the flour and sugar):
For the egg wash:

To make the ferment
It’s best to make this on day one of your croissant-making journey, so if baking over the weekend, make this early on Friday night (you need a couple of hours for it to chill before you can use it to make the actual croissant dough the same night).

Put all of the ingredients into a bowl and, using your hands, bring the ingredients together until they begin to form a dough ball.  Remove the ball from the bowl and knead it for 10 minutes on a clean surface, until you have a smooth, elastic dough.

You can make the ferment in your stand mixer using a dough hook, but I found there was too little of it for the hook to be able to reach and mix it properly, so I just used my hands. If using an electric mixer, put all the ingredients into your mixer bowl and process on a low speed for 3-5 minutes, until you have a smooth, elastic dough.

Once you have your elastic dough (using either method), shape it into a ball and leave at room temperature for 2 hours, then cover with clingfilm and  refrigerate (I refrigerated mine for two hours but it will keep for up to 3 days).

To make the croissant dough
I’d advise making the dough on day one, leaving it to rest in the fridge overnight, ready for the laminating process the next day.  So, like the ferment, you’d be making this on Friday night if baking over the weekend, but you can only start once your ferment has chilled in the fridge for a couple of hours.

If using an electric mixer, put the flour, milk, sugar, salt, yeast and your chilled ferment in the bowl of a mixer fitted with a dough hook (note, the butter for laminating should not be added here!) Process on a low speed for 3-4 minutes, then increase the speed to high and mix for a further 2 minutes.  If making by hand, bring the ingredients together in a bowl first and then knead by hand on a clean surface for 10-15 minutes, until you have a smooth, elastic dough.

Gather the dough into a ball, put it into a clean plastic bag and refrigerate for at least 2 hours, or preferably overnight.

Laminating the dough
Laminating and shaping the dough will take about five or so hours in total, including rest periods for the dough, so if going by my weekend baking guide, it should be done on Saturday morning or afternoon.

Remove dough from the fridge, together with the butter – both should be about the same temperature (cold but malleable).

Put the butter between two sheets of baking paper and use a rolling pin to gently pound the butter into a 20cm square about 1cm thick.

Using a lightly floured rolling pin, roll the dough out into a 20 x 40 cm rectangle.  Remove the butter from between the baking paper and place it in the centre of the dough, then fold the two sides of pastry over the top of the butter, pinching them together at the ends and all along the seams to ensure the butter is completely enclosed in the pastry.

Next, carefully roll the pastry out again, this time into a rectangle about 20 x 90 cm.  Fold one long end of the rectangle in by one third, then fold the other long end over the top (like folding a letter) so the dough is now 20 x 30 cm.  Put your dough back in its plastic bag, (or wrap it in clingfilm), place it on a tray and refrigerate for 20 minutes to allow the gluten to relax.  Repeat this rolling and folding process two more times, ensuring that before rolling the pastry for the second and third time, you rotate it by 90 degrees (so that the dough is rolled in a different direction to the previous fold), and that you rest the dough in the fridge again (in its plastic bag) for 20 minutes after each of the second and third ‘turns’ (folding and rolling).

Shaping the dough
Once the dough has had its third and final 20 minute rest in the fridge, roll it into a 25 x 100 cm rectangle.  This can take some effort as the dough will resist being rolled out, but persist, you’ll get there.  Use a light sprinkle of flour to patch up areas where there may be butter poking out while you roll.

Line your ruler up between the first bottom incision and the first top incision. Use a knife to cut along the line.  Then rule from that same top incision to the next bottom incision and cut along that line so that you have cut out triangle.  Continue all the way along the pastry with the remaining incisions.  You’ll end up with 18 neat triangles, plus two half triangles (I rolled these together into a square to make a rectangular pain au chocolat – waste not want not!)

Stack the triangles on a tray lined with baking paper, cover lightly with a clean tea towel and put in the fridge to rest for about 10 minutes.

Remove from the fridge and one triangle at a time, make a small incision at the mid-point of each triangle’s base.  Gently pull the two corners of pastry that are either side of your incision outwards and then start to roll the base up towards the tip of the triangle, stretching the tip out as you get closer to it.  Once the triangle is fully rolled, press the tip into the croissant to secure, and place the croissant, tip-side down, back onto the tray lined with baking paper. Repeat with remaining triangles, spacing them well apart on the tray.

If making chocolate croissants, place long thin strips of dark chocolate (as much as you like) on the base of the triangle, then fold the dough over to cover and continue rolling as per the plain croissants.

If you want to, you can now freeze the croissants.  Alternatively, if following my weekend guide, cover them with a clean tea towel and refrigerate overnight.

Baking
Before the croissants can be baked, they need to prove (or rise).  If they’ve been in the fridge overnight, remove them from the fridge (you’ll be into Sunday morning if following my weekend guide), replace the tea towel with a fresh, damp tea towel to cover the croissants and leave them in a warm place for 2 – 2.5 hours until they have more or less doubled in size (if you are proving straight away after rolling i.e. your croissants are not chilled, you will need only 1.5 – 2 hours for proving.  If proving croissants from frozen, prove for 2.5 - 3 hours).

Once the croissants are almost at the end of their proving time, preheat your oven on as high a temperature as it will go.

Make your egg wash by beating the egg, milk and salt together in a bowl.

At the end of the proving time, brush the croissants with the egg wash and place in the oven, reducing the temperature immediately to 190C (175C for a fan oven).

Bake for 15-17 minutes, until they are a beautiful golden colour, then remove from the oven and allow to cool slightly before eating. 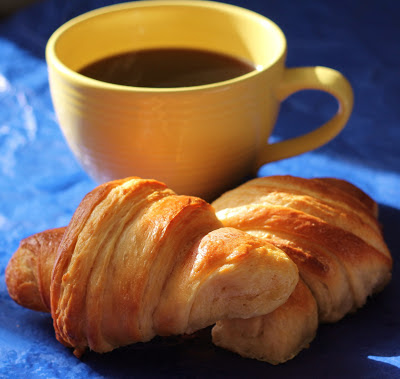