Sometimes things don’t go quite according to plan and this week is the perfect example of that.  You see I was supposed to be flying off to sunnier climes tomorrow for a short break with friends.  Alas, sadly for us, the airline we had booked with had other ideas and decided now would be a good time to go on strike (I’m disappointed that they didn’t consult me before making this hasty decision; I would have counselled them that now really would not be a good time to strike thanks very much!)

Fortunately, all is not lost and my friends and I have managed to book alternative flights.  The downside is that we will lose a whole day of our holiday; turning our short break into… well, I suppose an abridged short break!  Still, I refuse to let my excitement be quashed and have already discovered a few local bakeries I can visit whilst away, from which I fully intend to sample as wide a selection of baked goodies as possible.  All in the name of research for this blog of course! 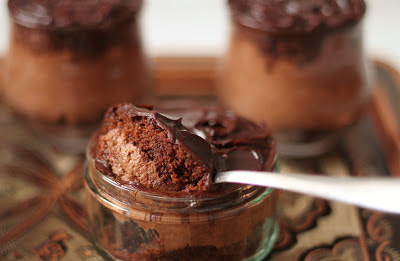 The other thing that didn’t quite go according to plan this week was my baking.  I was all set to make, and indeed I did make, chocolate cupcakes.  But - much as I know this will come as a shock to you all - it would seem that even one as perfect as I can get it wrong occasionally, and when I pulled the cakes out of the oven, rather than the perfectly domed beauties they should have been, I found myself with a batch of sunken cakes whose ‘muffin tops’ had spread and all joined together.  Worse still, when I tried to separate them, they began to fall apart in my hands!  Crumbling cupcakes with sunken middles: not a good look.

My mistake lay in taking my eye off my mixer and therefore overbeating the final mixture (let that be a lesson to us all!) but because the cakes still tasted as they should – moist, chocolaty and delicious - I decided that if life was going to hand me lemons, I would make lemonade.  Or in this instance, if life was going to hand me sunken, crumbly chocolate cupcakes, I would make chocolate mousse cake pots, and holy guacamole, I’m glad I did!  I love how sophisticated these individual desserts look and, more importantly than that, they tasted absolutely divine: two layers of chocolate cake, alternating with a light and airy chocolate mousse and a rich, heavy chocolate ganache.  A chocoholic’s dream!  So you see, sometimes when things don’t go to plan, it can be for the best. 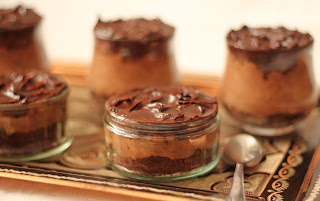 Adapted from ‘Cupcakes!’ By Elinor Klivans

Makes 12-15 individual desserts (for which you will need clear glass ramekins or small bowls.  Alternatively, if you don’t have that many ramekins, you could make one large dessert in a big dish)

Preheat the oven to 180C (160C for fan oven) and line a deep muffin tin with large paper cupcake liners (I used cases with a 5cm base diameter).

Melt the chocolate, either over a bain marie (break the chocolate into pieces and place in a bowl.  Set the bowl over a pan of simmering water, making sure the bottom of the bowl does not come into contact with the water.  Stir the chocolate slowly.  Remove from the heat once it has melted), or in short bursts in the microwave.  Set aside to cool.

Sift the flour, baking powder, bicarb and salt together three times and set aside.

With a handheld electric mixer or a freestanding mixer (use the K-beater attachment), beat together the butter and sugar until pale and fluffy.  On a low speed, mix in the melted chocolate.

Add the eggs one at a time to the butter, sugar and chocolate mixture, combining on a medium speed until blended, then add the vanilla and the soured cream.

Turn the mixer speed back to low and add half of the flour, mixing until it is just incorporated.  Then mix in the water before gently folding in the remaining flour.

Fill your cupcake liners to just below the top.  Bake the cupcakes for approximately 20 minutes or until a skewer inserted into them comes out clean, then cool in the tray for 10 minutes before transferring them to cool fully on a wire rack.

To make the ganache
Place your broken chocolate pieces into a heatproof bowl.

Heat the cream and butter in a saucepan over a low heat until the butter has melted and tiny bubbles start to appear around the sides of the saucepan.  Once these bubbles appear, remove the pan from the heat – you do not want the cream to boil – and pour the hot cream over the chocolate.

Allow the chocolate to sit in the hot cream for 30 seconds before whisking to a smooth, glossy sauce and finally whisking in the vanilla extract.  Cool to room temperature before using (if the ganache sets upon cooling, you can reheat it over a low heat until it starts to soften and melt again).

To make the chocolate mousse
Place half of your ganache into a large bowl (set aside the other half for when you assemble the mousse pots).

In another large bowl, whisk the cream, icing sugar and coffee together, slowly at first until the coffee granules have dissolved, then on a medium speed until firm peaks form.

Whisk about a cupful of the cream into your bowl of ganache until no white streaks remain.

Use a rubber spatula or large metal spoon to gently fold the remaining whipped cream into the ganache until the cream is fully incorporated.

To assemble, take one cupcake and cut it in half horizontally (as if you were slicing the top off it).  Break one of the halves into slightly smaller pieces and press these down gently into the base of one of your ramekin dishes, levelling it out into a flat layer.  Next take a generous tablespoon of the mousse and spoon it over the cake layer, again levelling it out using the back of the spoon (if the sides of the ramekin get dirty or streaked while you are doing this, take a damp piece of paper towel and gently wipe the sides once the mousse is in place).  Break up the second half of the cupcake over the mousse layer.  Finally, drizzle or gently spread some of the ganache that you set aside over the top to cover the cake.  Repeat for the remaining ramekins.

If you are making one large dish, simply break half the cupcakes into the base of the dish, patting gently down, then spread all the mousse over, levelling it out before breaking the other half of the cupcakes over the mousse and finally covering with ganache.

Serve immediately or set in the refrigerator, removing 1½ - 2 hours prior to serving.