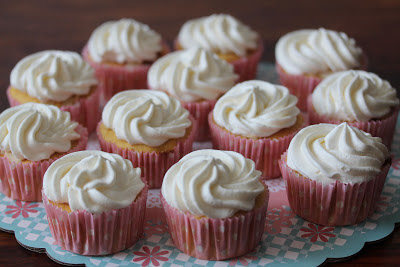 A couple of weeks ago I was making my way home on the tube.  It had been raining in London that day (quelle surprise), which as all women know - and perhaps some men too - is never conducive to a good hair day, so I wasn't overly surprised when a girl stood next to me on my carriage started bemoaning the state of her hair to the friend she was travelling with.  Unfortunately for me, the girl with the 'bad hair' either hadn't clocked me or had simply decided not to engage her brain before opening her mouth when she loudly proclaimed, 'Urgh, my hair's gone curly!!!'

Cue awkward silence as all eyes fell on me.  Followed by derisive tittering from the two friends. 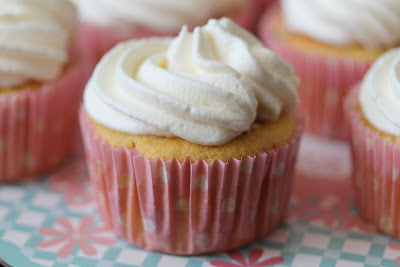 You see I have extremely curly hair.  Not the good kind of curly of course - wavy, flowing, glossy tresses - no, that would be too much to ask for.  Mine is the crazy, mind-of-its-own kind of curly: the kind that refuses to behave; the kind that always ends up looking bedraggled no matter how much time I spend trying to tame it each morning; the kind that sticks out in any direction it pleases.

Occasionally I'll run a pair of hair straighteners through ‘the mop’ in an attempt to create some semblance of sleek sophistication - usually when I've lit upon a pointless article like this one (I know, I know, if I am silly enough to believe the Daily Mail when it tells me that no man in the world likes curly hair on girls, I deserve to be teetered at) - but generally I've resigned myself to my curls. 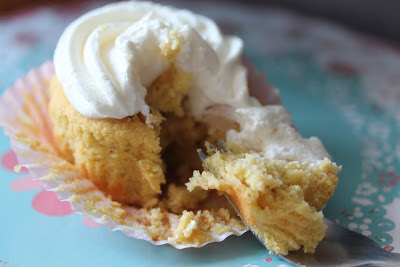 The moral to my story is that I suppose we always want what we can't have, but we deal with it and we adapt right?  I mean, sheesh, not having straight hair isn't the end of the world (that's right Daily Fail, I won't kowtow to you!)

I say this because a couple of my aunts have coeliacs, which means they can't consume anything containing gluten.  That means pretty much all breads, cakes and biscuits are off limits.  Holy guacamole, if I thought dealing with curls was hard, I don’t know how I’d deal with not being able to eat cake!!!  So sometimes I like to come up with a bake that has been adapted for my aunts and is gluten free.  These apple and almond cuppy-cakes fit the bill.  Personally I found them really quite delightful and the non coeliacs who ate them weren't complaining either, so a win-win all round I'd say. 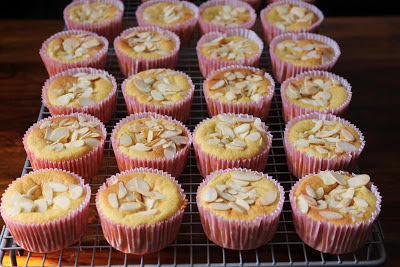 For the cupcakes:
For the frosting:
To make the cupcakes, preheat your oven to 180C (160C fan) and line two muffin trays with cupcake cases.

Place the chopped apples into a frying pan together with half of the lemon juice and two tablespoons of your caster sugar. Cook on a low heat for about eight minutes until the apples are soft. Roughly squish them with a fork and then leave them to cool.

Once the apples are cool, place them in a food processor together with the remaining lemon juice and caster sugar, the eggs and the ground almonds. Blend all the ingredients together.

Spoon the batter into your cupcake cases, filling them to about 1cm below the rim.  Sprinkle a few flaked almonds over each of the cupcakes.

Bake in the oven for about 22 minutes or until a skewer inserted into the cakes comes out clean.  Leave to cool.

To make the frosting, place all the ingredients in a bowl and whip until the cream only just holds its shape but is firm enough to pipe.  Transfer into a piping bag with a star shaped nozzle and pipe onto the cupcakes once they are thoroughly cool. 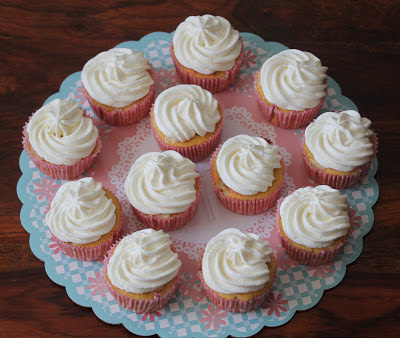