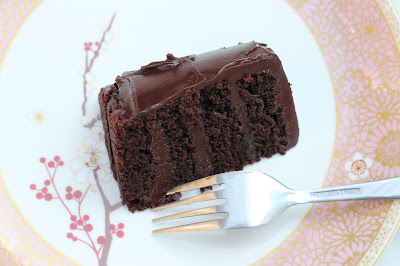 Egads it’s hot! Stinking hot! Indeed such is the heat, that when you step outside and feel its blast, for a second you wonder if maybe you’ve magically teleported (with a spot of Harry Potter Floo Powder, naturally) to the Bahamas.

On the radio the other morning, there was a discussion about the things one least feels like eating in such weather and someone suggested baked potatoes. ‘Yes!’ I thought to myself, 'so true! What crazy person would force down something so dry, hot and stodgy in such heat?' I got my answer the next day when I went into work and discovered a colleague eating what else but a baked potato for his lunch. To his credit, he chewed and swallowed away stoically on his arid, heavy potato until he’d finished the last of it whilst I sat there balking incredulously at his abysmal choice of luncheon. 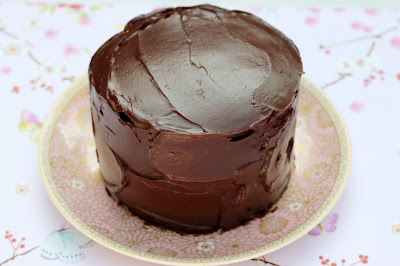 That made me realise though, we clearly all have different opinions about what to eat in extreme weather. For example, someone else suggested to me that it is too hot for cake. I'm sorry, what? Too hot for cake???!!! Pah! How sadly mistaken some people can be. 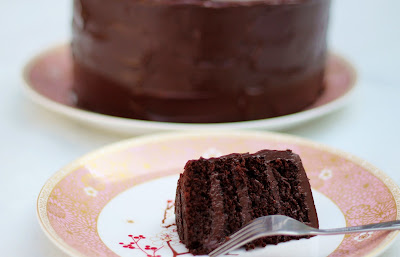 Consider this Epic Chocolate Cake that I’ve baked.  Whilst some may argue that it’s perfect comfort food for a cold winter’s day (and I wouldn’t disagree with you there), I see no reason why, with the right accoutrements, it couldn’t also be ideal summer food too. Say with a scoopage or two of vanilla ice cream, or some cold single cream generously sploshed over it.  Convinced? I thought you might be.

So yes, whilst a baked potato in this heat might be bordering on monster raving lunacy, let us all agree that it’s never too hot for cake. 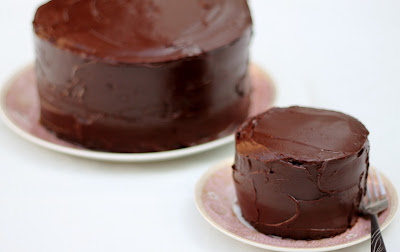 This recipe is an adaptation of the now famous Epic(urious) Chocolate Cake, an American cake recipe that satisfies extreme chocolate fiends like me who prefer their chocolate cake moist, rich and intense.  In fact, I’d go so far as to say that it’s one of the best-tasting chocolate cake recipes I’ve tried, along with Jo Wheatley’s chocolate mud cake.  Be warned though, it’s uber-rich, so once you’ve had yourself a hefty wodge of it, you may need a lie-down! 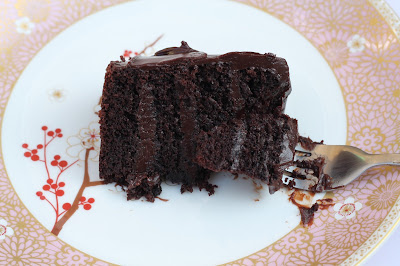 Technical notes:
For the cake:

For the chocolate fudge frosting:

To make the cake
Preheat your oven to 160C.

Grease and line your tins. Depending on the size of cake you wish to go with, this could be either: two 10" tins; or three 8" tins plus two 4" tins (if you don't have 4" tins, you can simply place a few cupcake cases into a muffin tray and bake cupcakes from the spare batter).

Sift together the sugar, flour, cocoa powder, baking soda, baking powder and salt. Ideally you should sift these ingredients together three times to ensure they're fully combined and that you've trapped lots of air into them (results in a fluffier cake).

Crack the eggs into a clean bowl and whisk on a high speed until they are thick and pale in colour (this will take a few minutes). I used an electric handheld whisk for the eggs as the attachment from my freestanding mixer wasn't deep enough to reach them. Once they were whisked, I switched to the freestanding mixer, but you can stick to a handheld if you wish.

Add the oil, yoghurt and vanilla to the eggs and whisk on a low speed to combine.  Then add the chocolate and coffee mixture and again whisk gently to combine.

If you have a K-beater/paddle attachment, at this point swap the whisk attachment for the paddle.

If using two 10" tins, divide the batter equally between them then bake at 160C for 10 minutes before reducing the oven temperature to 140C and baking for another 50-55 minutes. The cakes will be done when a knife inserted into the deepest part of them comes out clean.

If using three 8" tins, pour enough batter in each one to fill them to about half way (about 600g of batter in each). Split the remaining batter between the two 4" tins or amongst the cupcake cakes (fill each case to about two-thirds). Bake the three 8" cakes at 160C for 10 minutes, then at 140C for a further 20-25 minutes (or until a knife inserted into the cakes comes out clean). The 4" cakes or cupcakes should be baked at 140C for 20-25 minutes. I baked the smaller cakes separately, after the 8" cakes were done. The batter was fine left to sit unbaked for an hour or so whilst the bigger cakes were baking.

Remove the cakes from the oven and allow them to cool in their tins for 10-15 minutes before turning them out of the tins and allowing to cool on a cooling rack.

To make the frosting
Break the chocolate into small pieces into a heatproof bowl. Add the golden syrup into the same bowl.

Heat the cream in a saucepan over a medium heat until it starts to simmer. At this point, remove from the heat and pour the cream over the chocolate and syrup. Allow to sit for 30 seconds (this lets the heat from the cream start melting the chocolate) before stirring with a whisk or a spatula to combine.

Once the chocolate has completely melted and combined with the cream and syrup to form a glossy ganache, add the cubes of butter and stir again until the butter is melted into the ganache and fully incorporated.

To assemble the cake
If you've baked two 10" cakes, slice each cake in half horizontally using a serrated knife or a cake leveller. If your cakes have a domed top, at this point you can also slice off the dome to ensure you have two flat cakes (just promise me you'll eat the sliced off tops rather than discarding them!)

If you've baked three 8" cakes, you will not need to slice the sponges in half as three layers of sponge is plenty for one cake, but I did slice my additional two 4" sponges in half horizontally.

Place one sponge upside down onto a cake plate, so that the bottom of the cake is facing up. Using a palette knife, spread a thin layer of ganache all over the surface of the sponge.

Place the next layer on top, again upside down, and again spread a layer of ganache all over the surface. Repeat the process until all your layers of cake are stacked on top of one another and each layer has been spread with ganache.

Use the remaining ganache to coat the the sides of the cake (you can add more ganache to the top of the cake too). If you have cupcakes, you can either pipe ganache onto the surface or spread it over with your palette knife.

Refrigerate to set. The cake can be kept in the fridge and removed about two hours before serving, or can be kept in a tin in a cool, dark place.
Posted by acupofteasolveseverything at 19:35