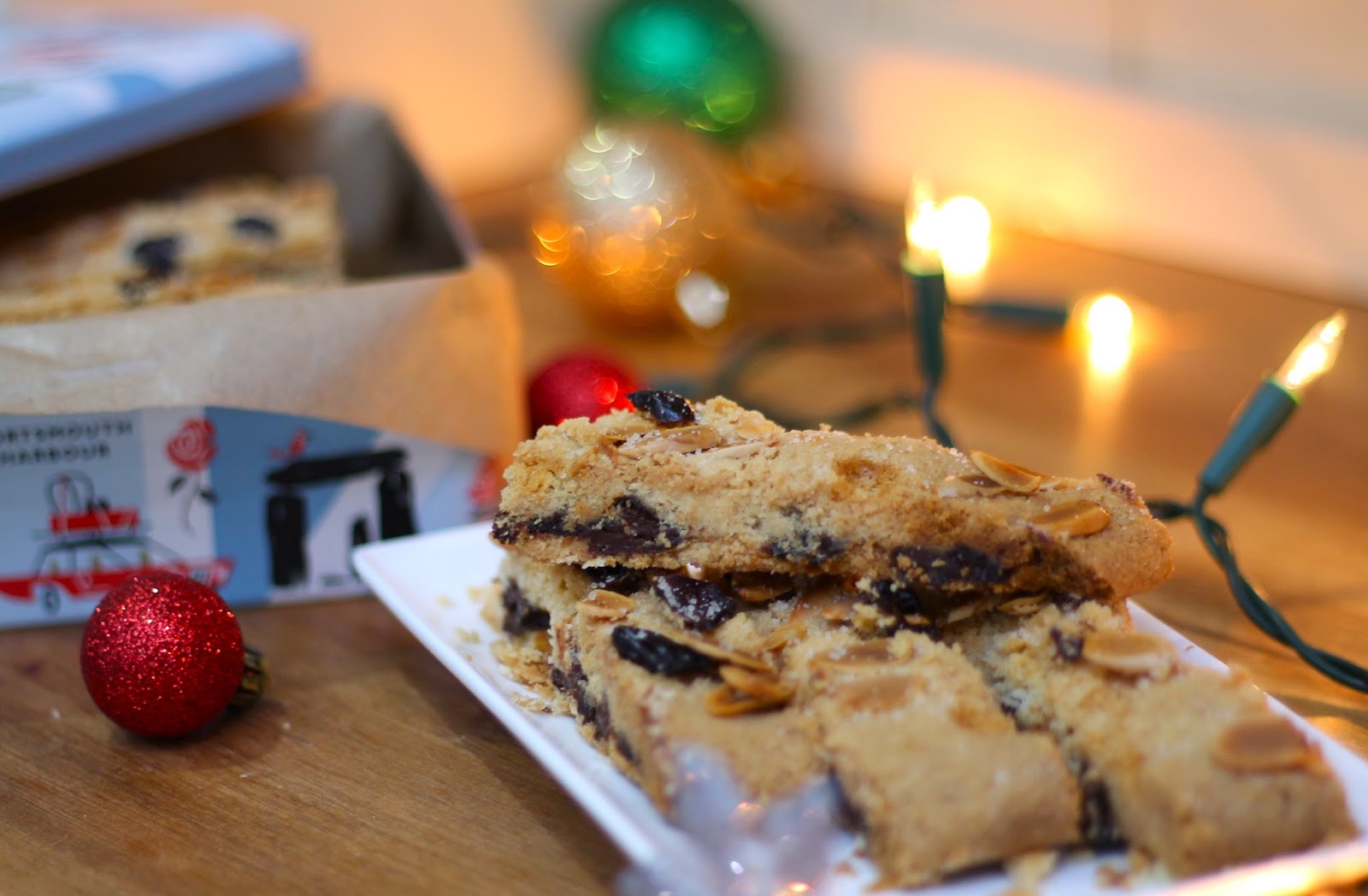 A couple of years ago I wrote a post, here on A Cup of Tea Solves Everything, for my Christmas Rocky Road. In that post I reflected upon the year that was about to end and how it had been an annus horribilis: one that had unfortunately been full of far more downs than ups and all in all, was rather tumultuous for all the wrong reasons. 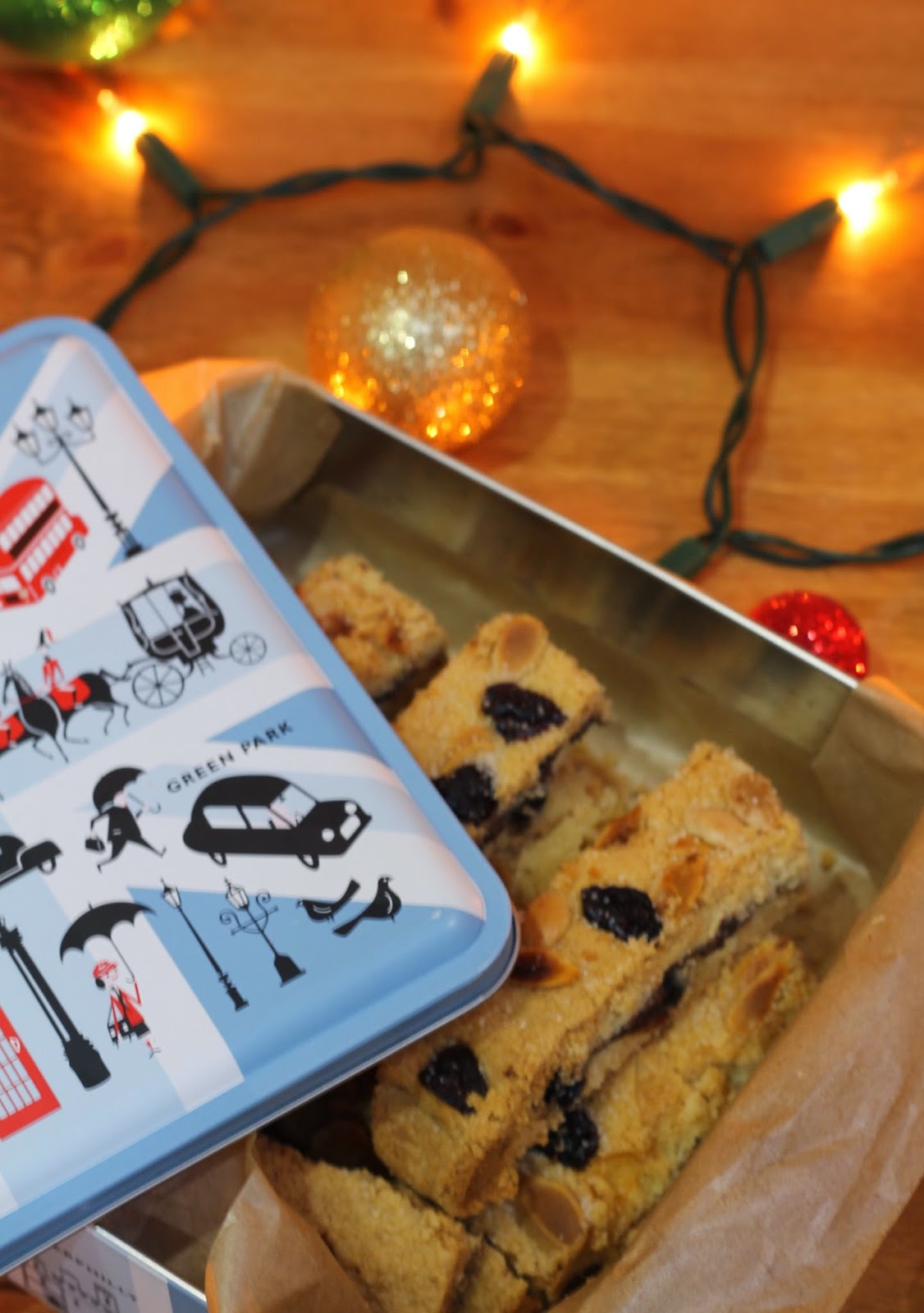 Two years on from that post and some of the things of which I spoke haven’t changed: for the most part, regrettably, I am still a cotton-headed ninnymuggins; whilst my nephew who was born that year is still, happily, scrumdiddlyumptious. In many other ways though, life has changed, and I’m pleased to say, vastly for the better.
If 2012 was an annus horribilis, one might say that 2014 has been, at the very least an annus bonkersis, but really more of an annus marvellousis: I’ve been fortunate enough to travel to parts of the world I never imagined going; I had an unforgettable time volunteering at an orphanage abroad; I have worked hard on my Spanish and am proud to say, have been rewarded for it; I’ve been surrounded by people I love; oh and my shoe collection has grown exponentially. Not sure I could ask for much more! 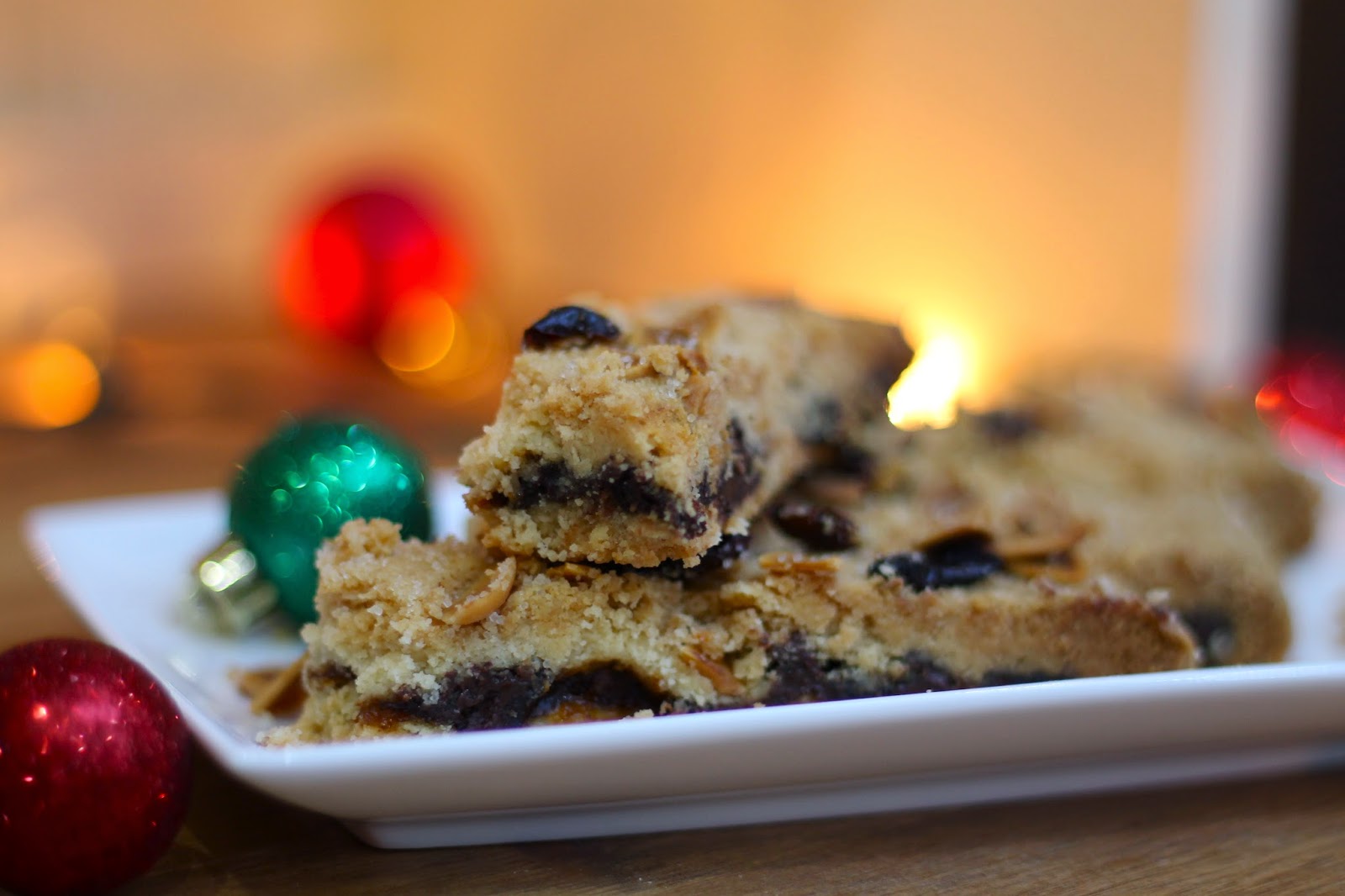 Not being Mystic Meg - a sad truth I have slowly come to accept - I don’t know what 2015 has in store, but I do have high hopes for it. Certainly if it’s anything like 2014, I shall continue to be a happy cotton-headed ninnymuggins. 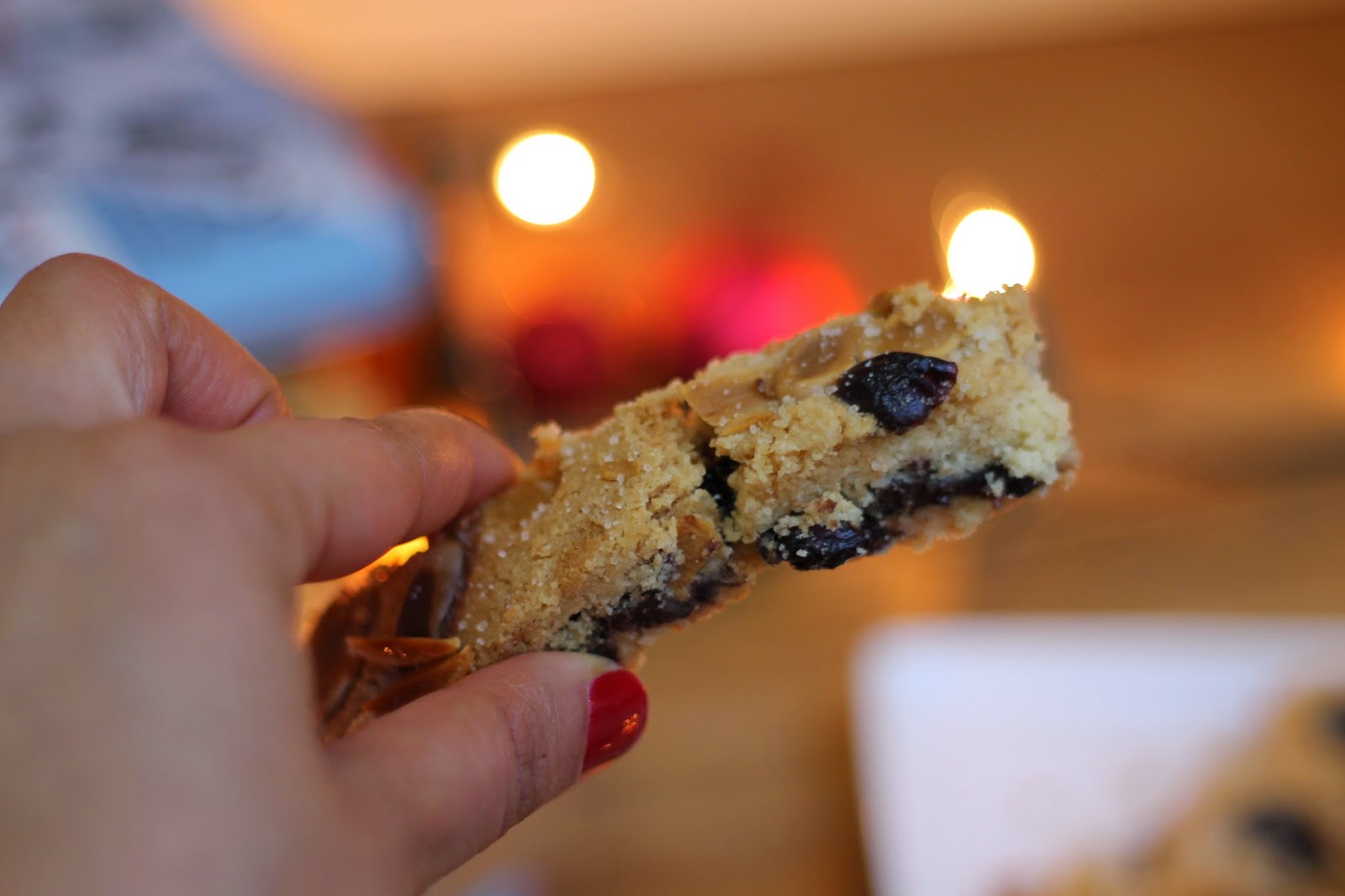 However, let me not be too hasty and wish away what’s left of 2014! After all, the most wonderful time of the year is upon us, and as always, I can barely contain myself (have I mentioned I love Christmas?!)! The fairy lights have been put up, Elf has been watched (sadly not as many times as I would like) and I’ve been listening to Christmas songs for far longer than is socially acceptable. I also baked these Christmas shortbreads, which a fellow baker, upon trying, stated were the ‘best shortbread ever’. If you need further convincing, I snuck some chocolate in them too. Well, come now, we all know that everything tastes better with chocolate… 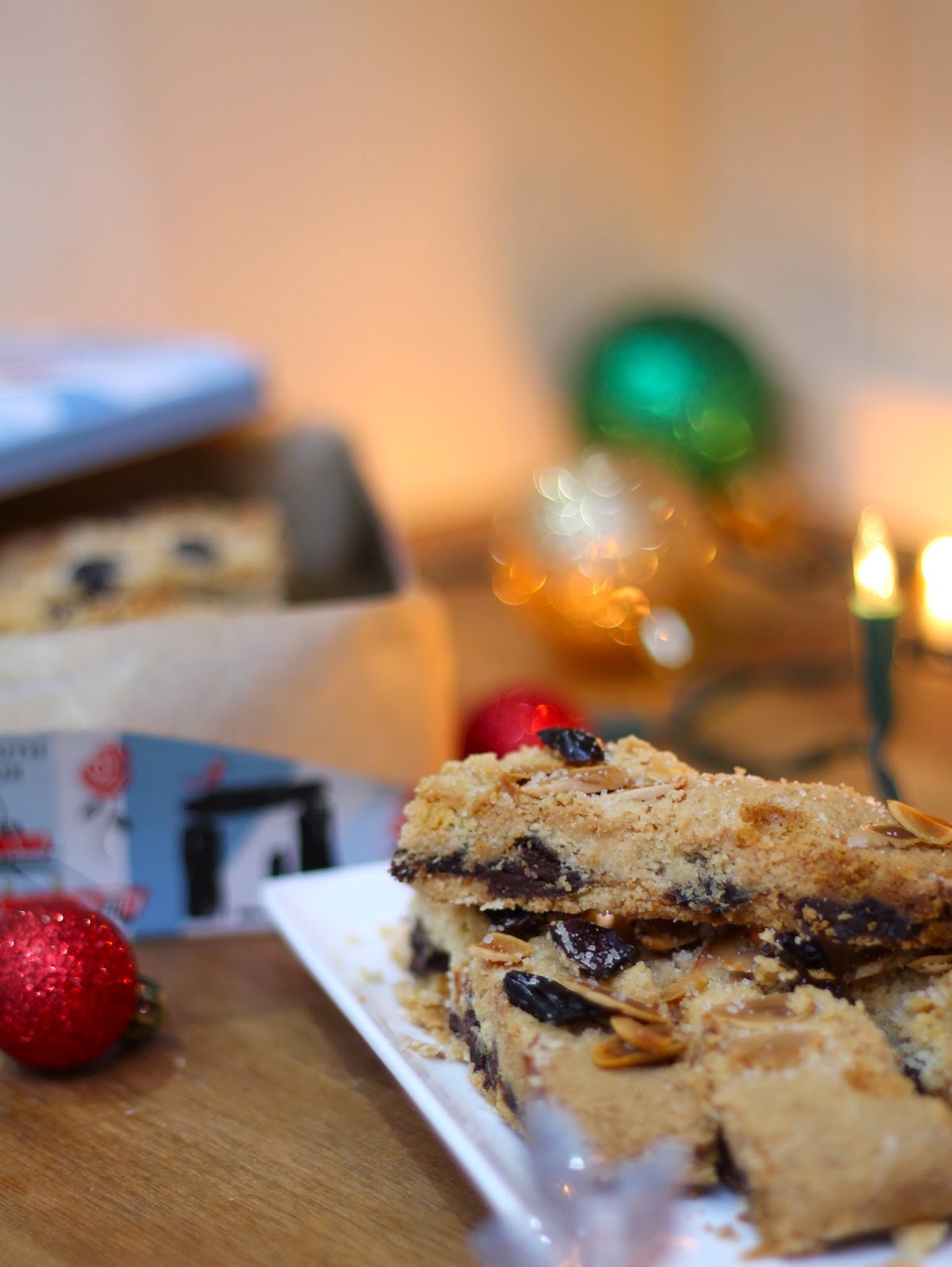 
You will also need a baking sheet. I used a 28cm x 17cm sheet, greased and lined with baking parchment.
Preheat the oven to 160ºC.
Place the flour, corn flour, butter, and caster sugar in the bowl of a food processor and pulse until the mixture comes together to form a soft dough.
Press about half of the dough firmly and evenly into the baking sheet to a thickness of about 5mm.
Spread the mincemeat over the dough and then sprinkle the chocolate chunks evenly over the top.
On a piece of baking parchment that is a little bit larger than your baking sheet, shape the remaining dough to fit over the mincemeat, then gently slide the shaped dough on top of the mincemeat-covered layer of dough.
Press the edges of the two layers of dough together gently with your fingertips, and then sprinkle over the flaked almonds and dried cranberries, pressing them lightly into the top of the shortbread so that they stick.
Bake on the middle shelf of the preheated oven for 35-40 minutes or until the shortbread is a pale golden colour.
Once out of the oven, sprinkle evenly with the golden caster sugar and allow to cool slightly before cutting into shape. Leave to cool completely before removing from the tin and serving.
Posted by acupofteasolveseverything at 11:05