Flatbreads part I: Roti (or chapatti) 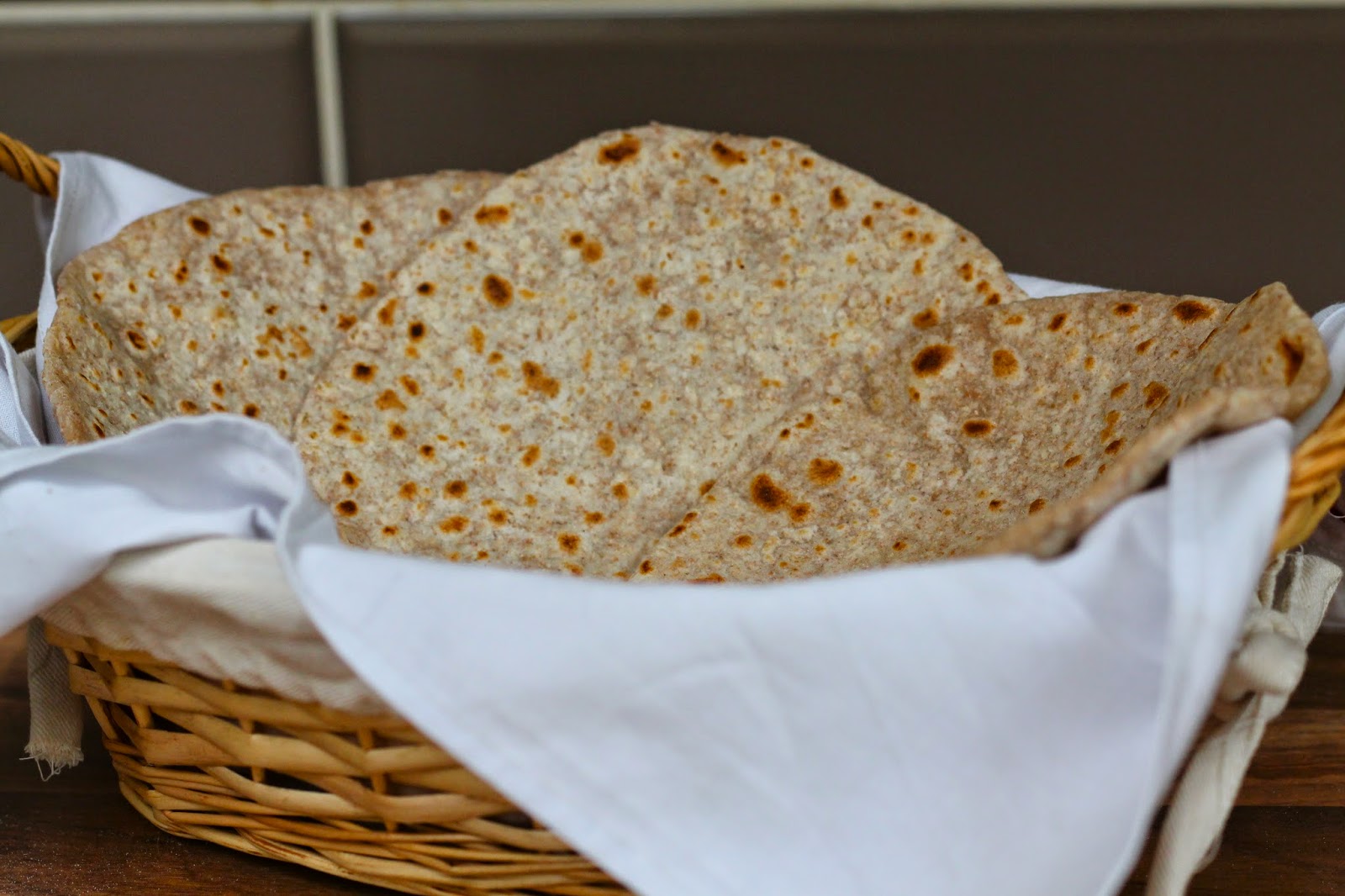 Lists. I love me a good list. Shopping lists, ‘to-do’ lists, places I want to eat lists, presents you may buy me because you know you want to lists, friends I need to catch up with lists (you think I’m joking…) In short, you name an aspect of my life and I probably have a list for it. 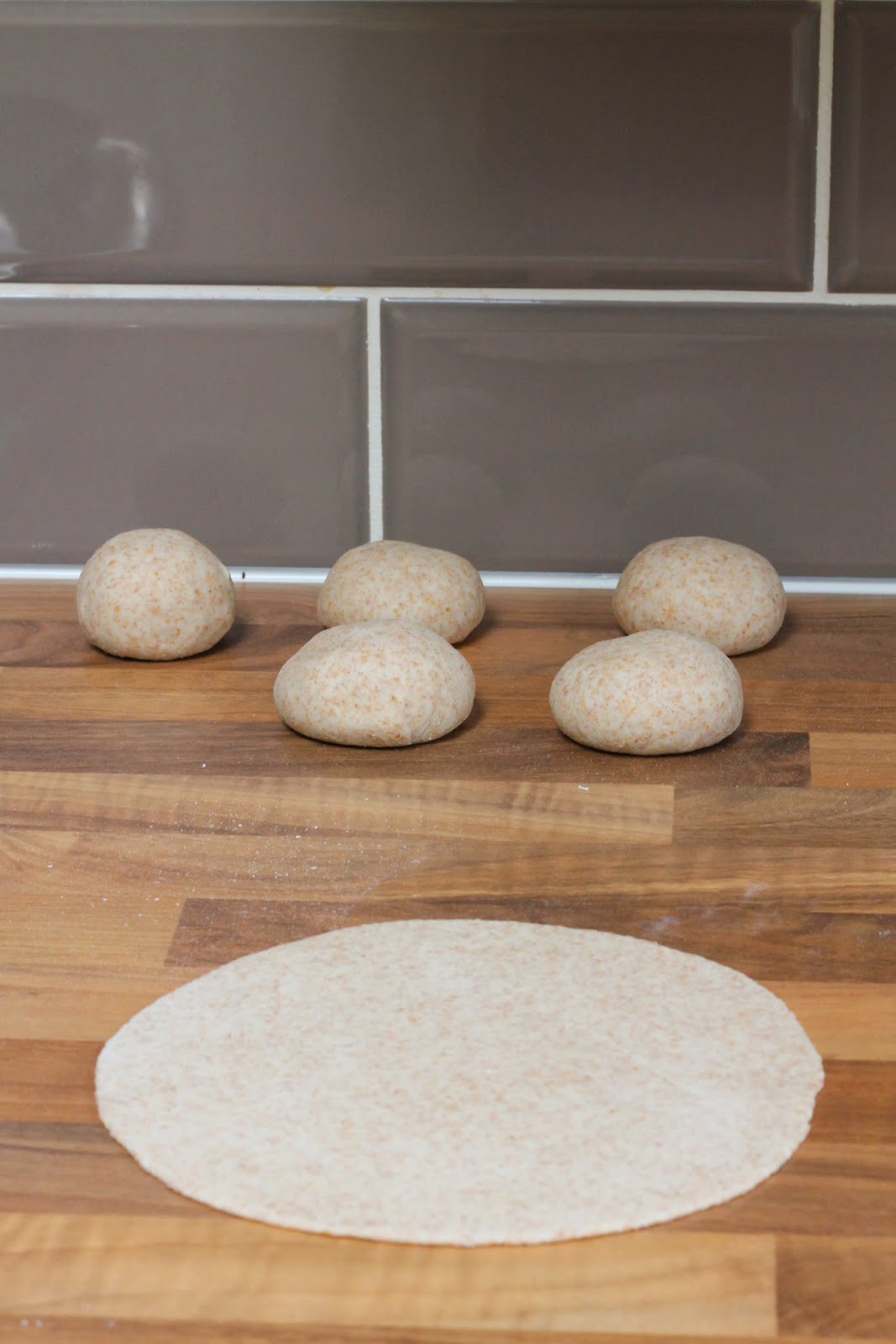 My latest list is food-related. I know, you’re not likely to be falling off your chair in surprise that food is involved, but should you care to know, more specifically, it’s a list of Pakistani recipes and dishes that I want to learn to make from the best cook I know (yup mummatha, that's you again. Take a bow).

Many girls of South-East Asian origin will probably tell you that they could make all of the foods on my list - in particular roti (or chapatti as it’s also known) - blindfolded from the age of about 11 or 12. I’m afraid the best I can offer is that at that age I could eat a lot of roti. Seriously, I mean a lot. I mean, I was like a machine. You’d never have wanted to challenge my 12 year-old self to an eating contest, not unless abject failure for you and embarrassing the both of us was your end goal. 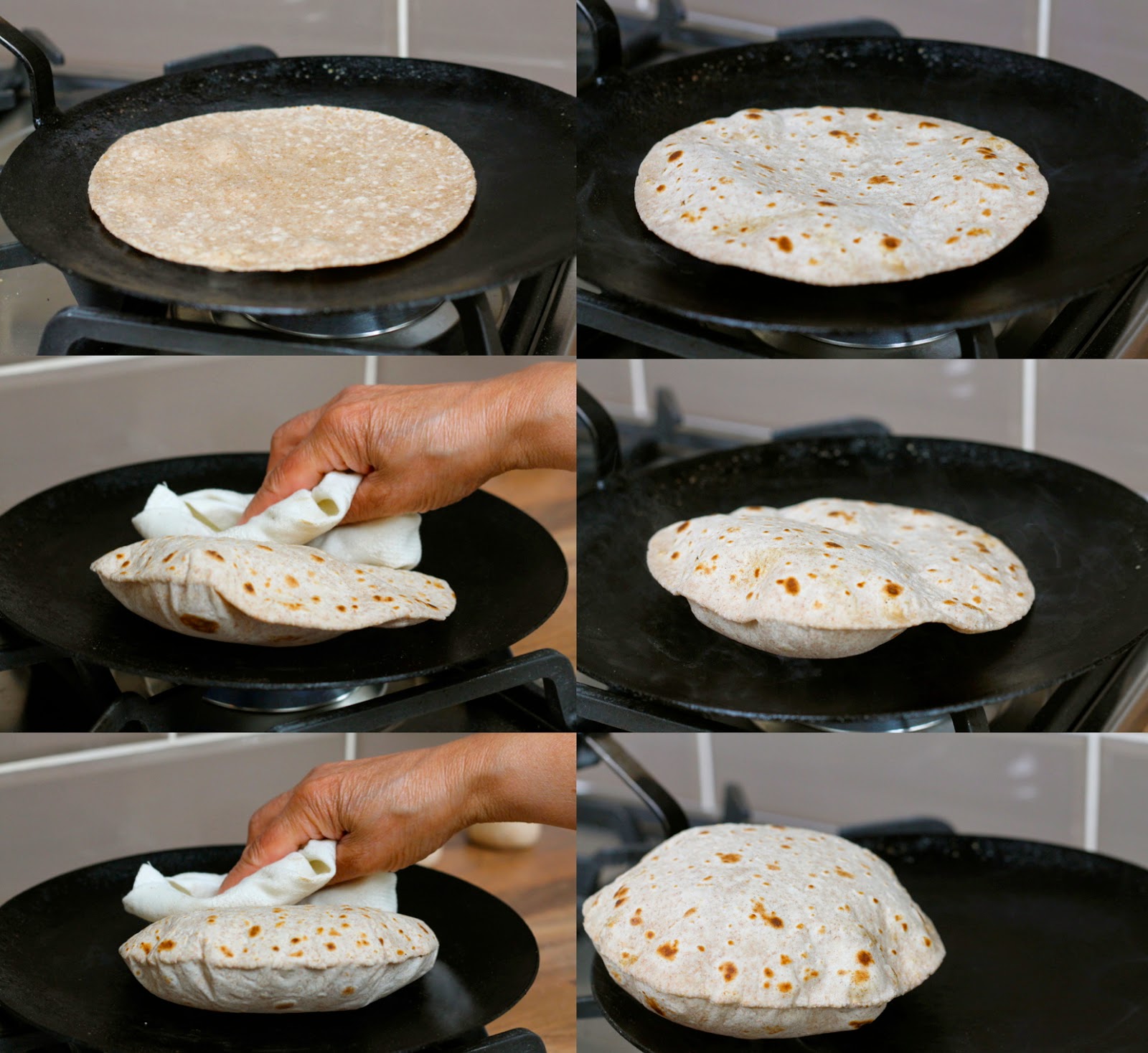 So here I am, fully-fledged adult (at least in physical age if not in mental age), mastering the art of making some of the amazing foods I grew up on. Roti (a type of flatbread) is a sensible place to start: it’s a staple with almost any curry, it's really easy to make (I promise. Plus I've done you lots of nice photos to help you at each step) and once you have the basic dough, you can experiment and dress it up further (look out for future posts on this). Best of all, if you find you happen to have run short of curry on your plate, you can take your roti, slather it with butter, sprinkle sugar on top, roll it up and enjoy a delicious cheeni roti. 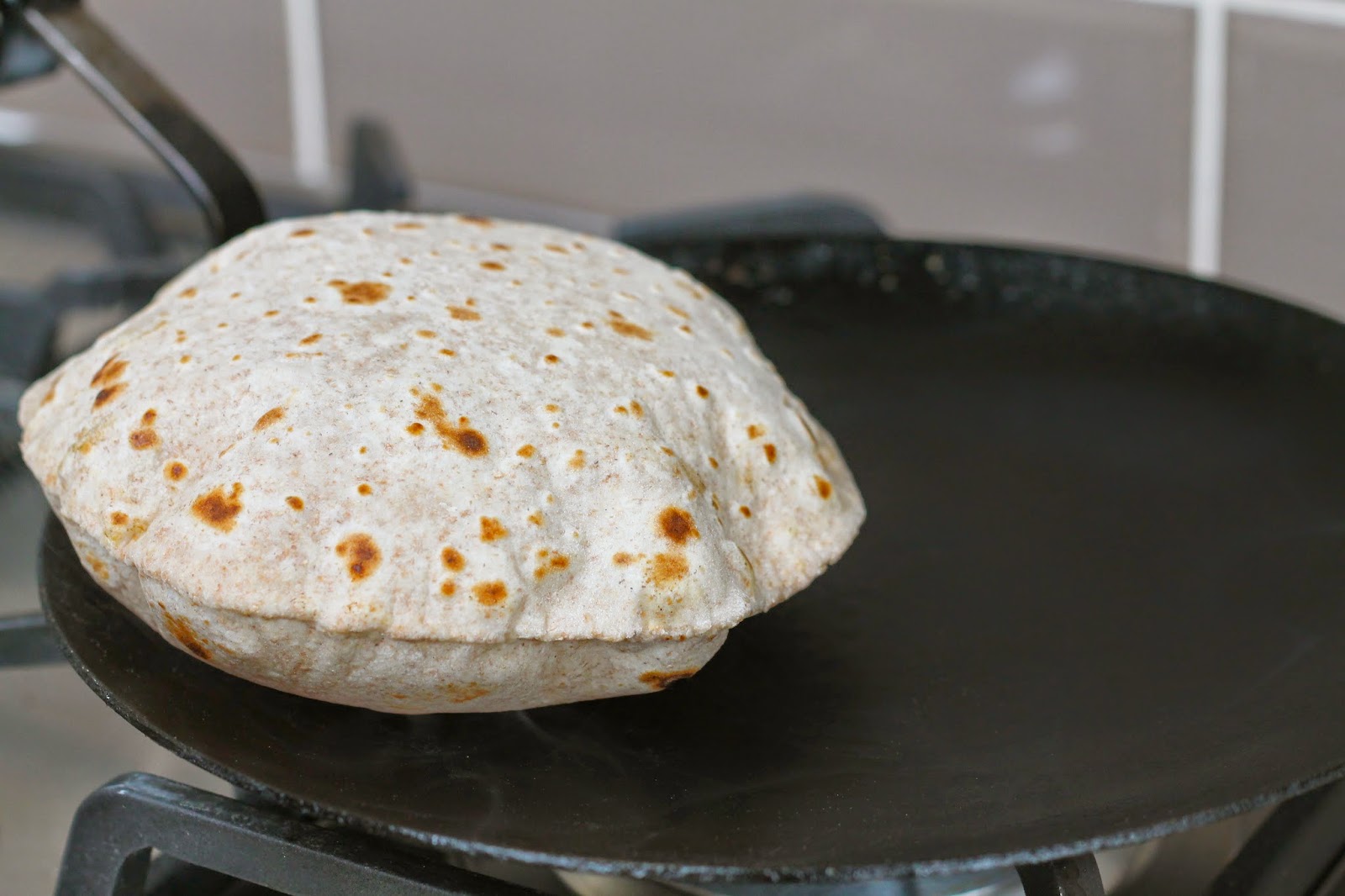 Ingredients (Makes about 20) - can be halved or doubled as required
You will also need a rolling pin and a tava - a cast-iron griddle pan usually concave in shape, used for making flatbreads. If you don’t have a tava, you can use a heavy-bottomed frying pan.

To make the dough
If using a free-standing mixer, attach the dough hook to the mixer.  Weigh the flour out into the bowl of your mixer, then sprinkle over the salt.

Pour about a third of the water into the flour and salt and start to combine the ingredients on a low speed.

As the water and dry ingredients begin to come together, slowly add another third of the water and turn the speed up to low-medium. Continue to combine.

Scrape down any dry or sticky dough clinging to the sides of the bowl occasionally.

Finally, add the remaining water, turning the speed of the mixer to high. Combine the ingredients on this high speed for a good 4-5 minutes, until all the water and flour are combined.

Your dough will be ready when it is tacky and bouncy to touch (see before and after photo below). Furthermore, there should be no dry flour left on the sides of the bowl. If you find the dough is hard when you prod it, add a touch more water and continue to beat until you have the desired consistency and texture. You cannot overbeat this dough, so if you’re unsure, keep mixing for a few minutes longer. 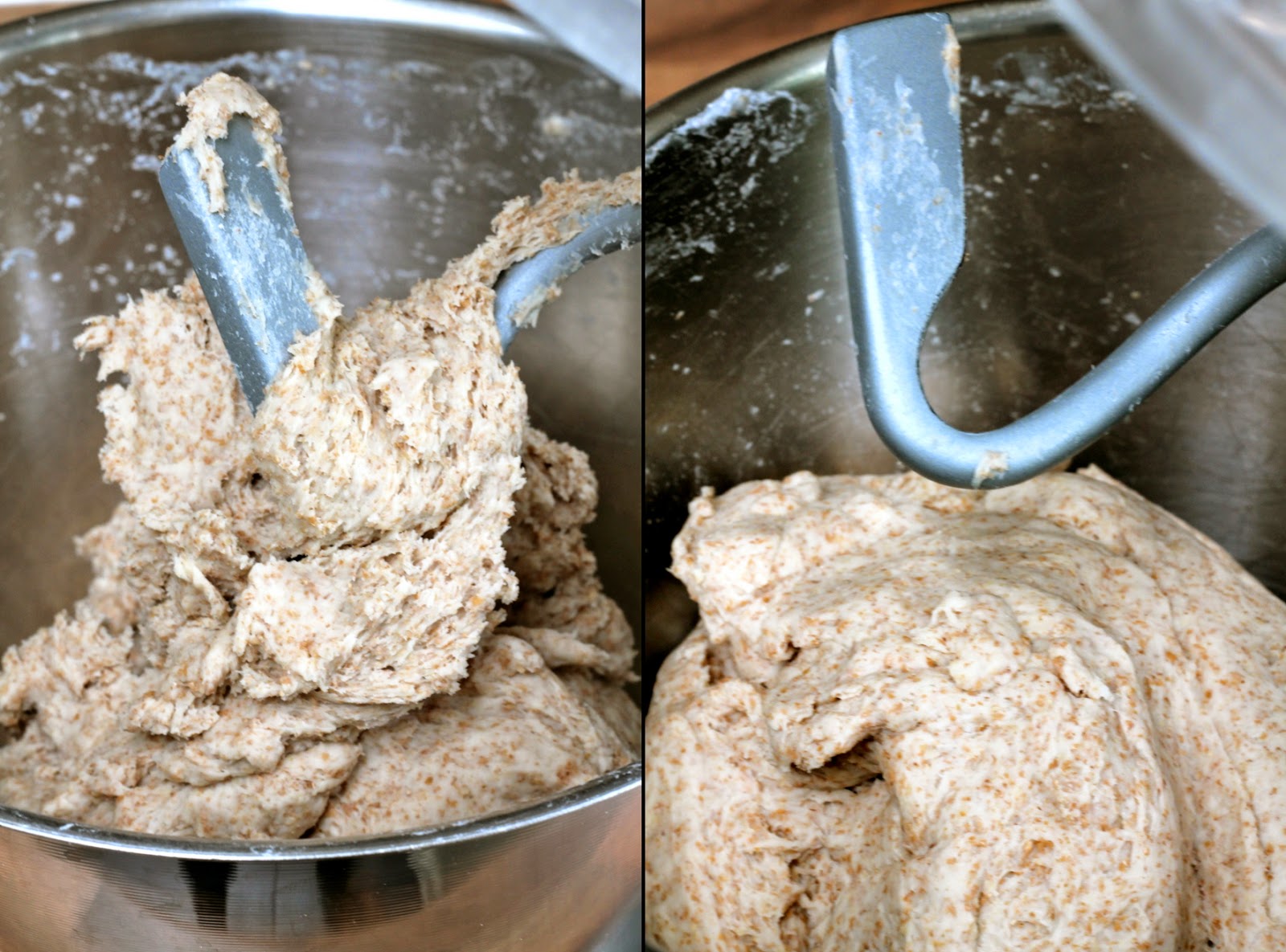 Transfer to an airtight container. Before placing the lid on the container, wet your hands well and then pat down the top of the dough so that it is all wet. This helps to prevent the top from going hard and crusty. 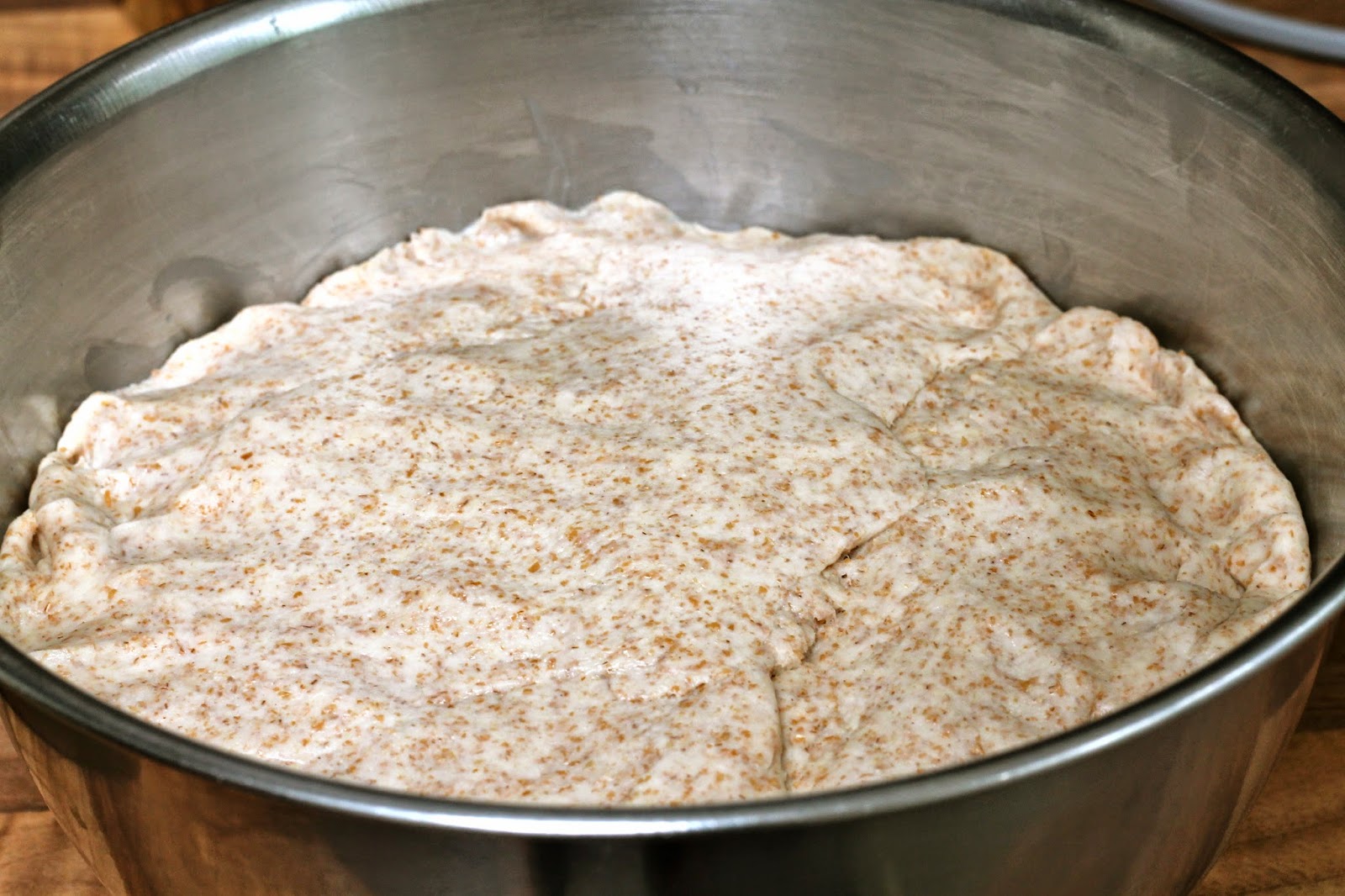 If making the dough by hand (be warned, you will need some muscle power as this takes quite a lot of elbow grease!), place the flour into a very large, wide rectangular bowl (if you have one in your kitchen sink, this is the type you want to use).

Sprinkle the salt over the flour.

Add the water bit by bit, mixing with your hands to combine.  Once all the water has been added, knead the dough for a good 10-15 minutes until it is pliable and tacky. Once ready, follow the instructions as above for storing the dough.

To cook the roti

Dust your hands very lightly with flour and then use them to scoop out balls of dough that are roughly 70-75g each (the size of about two golf balls together).

As you scoop out each ball of dough, dip it very lightly in flour, shaking off any excess and roll it firmly in a smooth ball, making sure there are no lines or creases anywhere in the dough, including the bottom of the ball (if there are, it may be that your dough is not soft enough, in which case you might want to add a tiny bit more water and knead it some more, though this isn't imperative. You don't need to leave your dough to rest again if you knead it a second time).

Once you have about half a dozen of these round balls, place the lid back onto the container of dough so that it doesn’t dry out whilst you are cooking the roti. 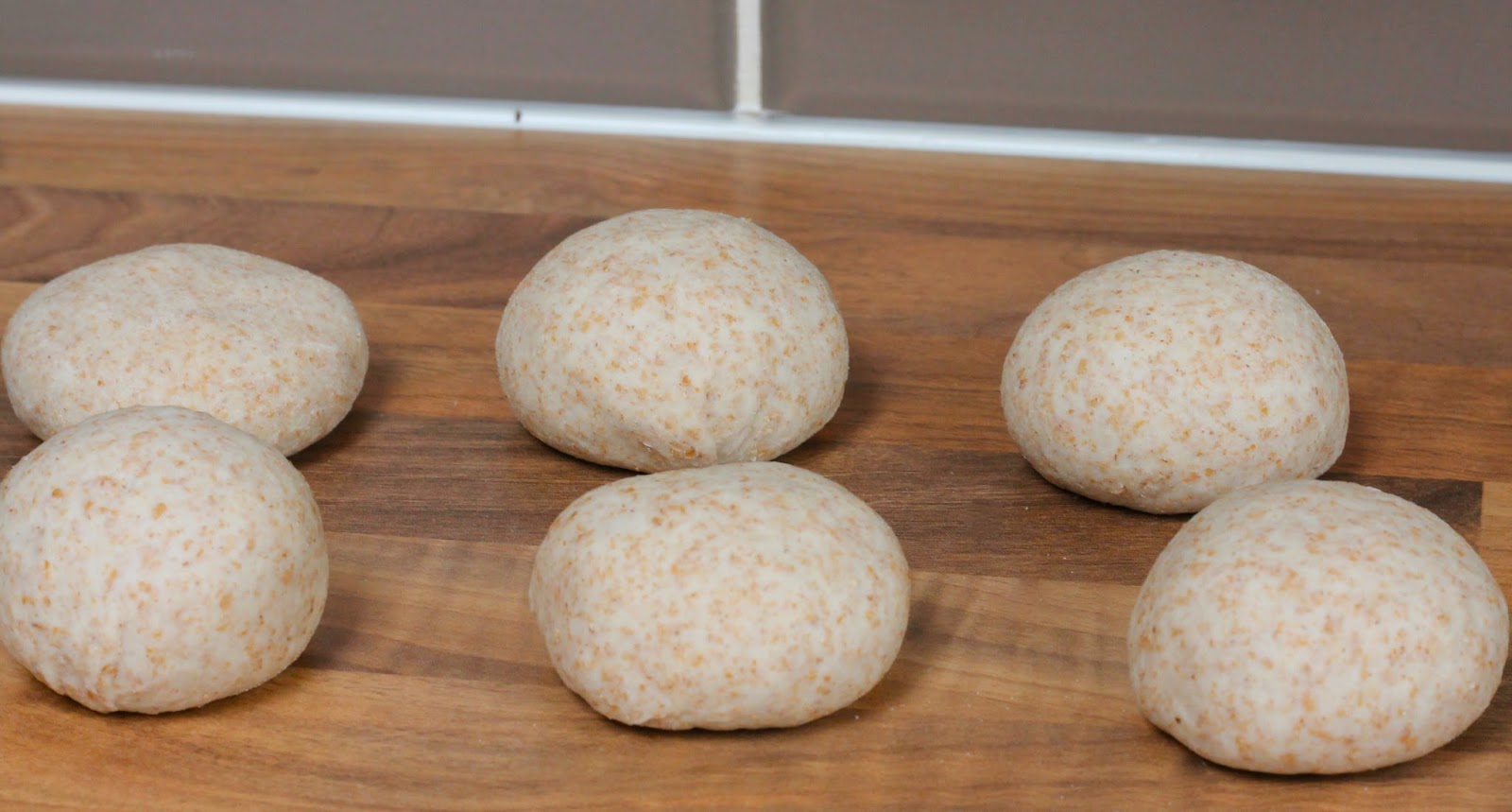 Place the tava on the stove on a high heat so that it's nice and hot for when you’ve finished rolling your first roti.

Take one of the dough balls and cover the rest with a damp tea towel, again to prevent the dough from going hard or crusty.

Working quickly, flatten the dough ball lightly with your hands, then dip both sides lightly in flour, shaking off any excess.

Roll the flattened ball out with the rolling pin.  You don’t need to roll with a heavy hand, just press down lightly with the pin, lifting and turning the dough as you go along to stop it from sticking, to keep it as round as possible and to ensure it is rolled out evenly.  Lightly dust with extra flour if needed to prevent it from sticking to your work surface.

Once you have a round that is about 17-18cm in diameter (approximately 7”) and about 1.5mm thick, it’s ready to cook. 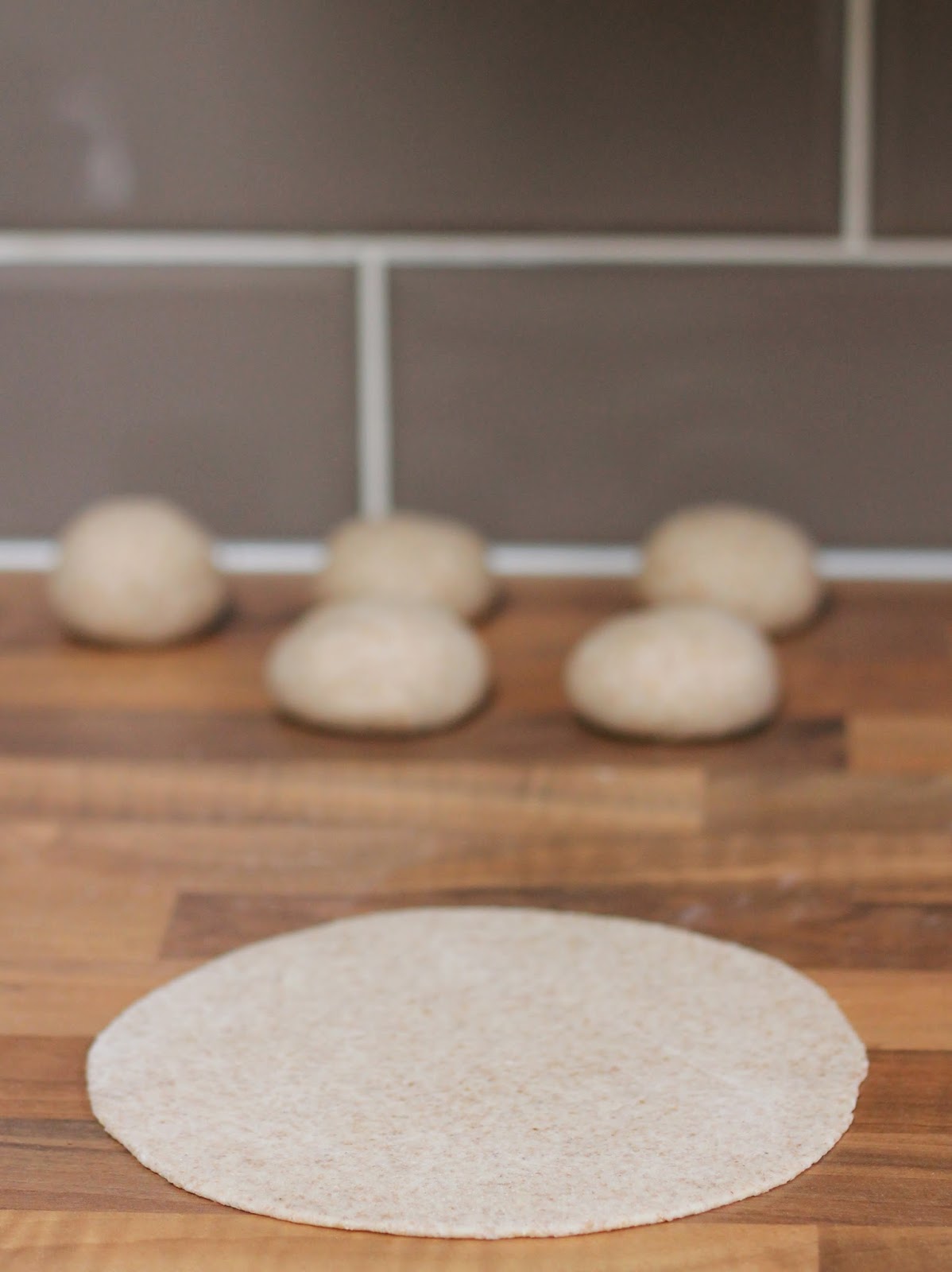 To test that your tava or frying pan is hot enough, sprinkle a little flour on it.  When the flour starts burning, wipe it away with a kitchen towel and then you can start cooking your roti.

Place the rolled out roti onto the tava.  After about 8-10 seconds, lift it and turn it over.  The side now facing upwards won’t be cooked, but don’t worry, you will be turning the roti over again later. 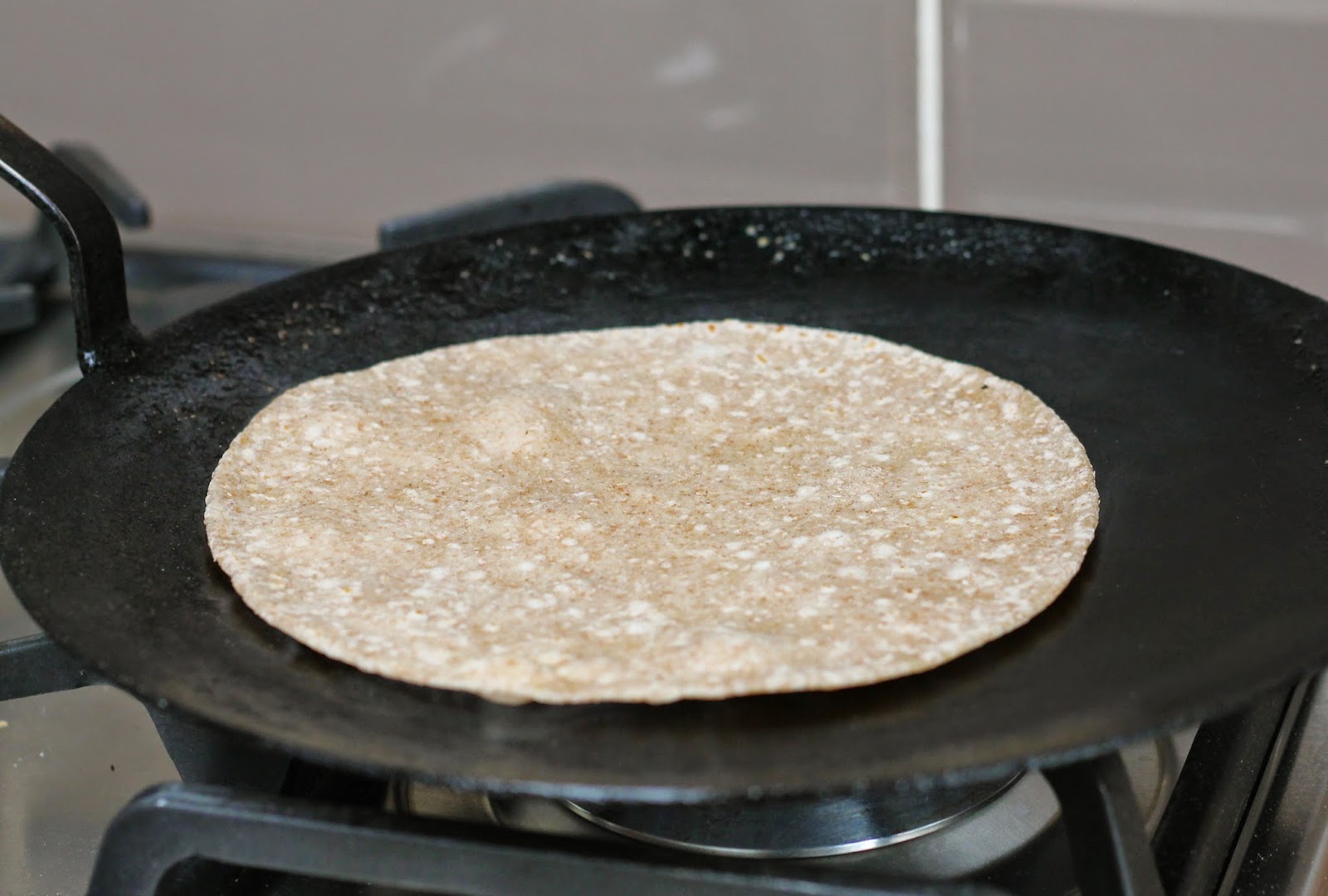 Now continue to cook the roti, twirling it around on the spot with your hands every few seconds to allow the bottom to cook and turn an even brown/golden colour and to prevent it from sticking to the pan.

After about 25-30 seconds the top of the roti will start to turn a speckled white colour (see photo above) and the underneath should be evenly browned.  At this point, flip the roti over again. 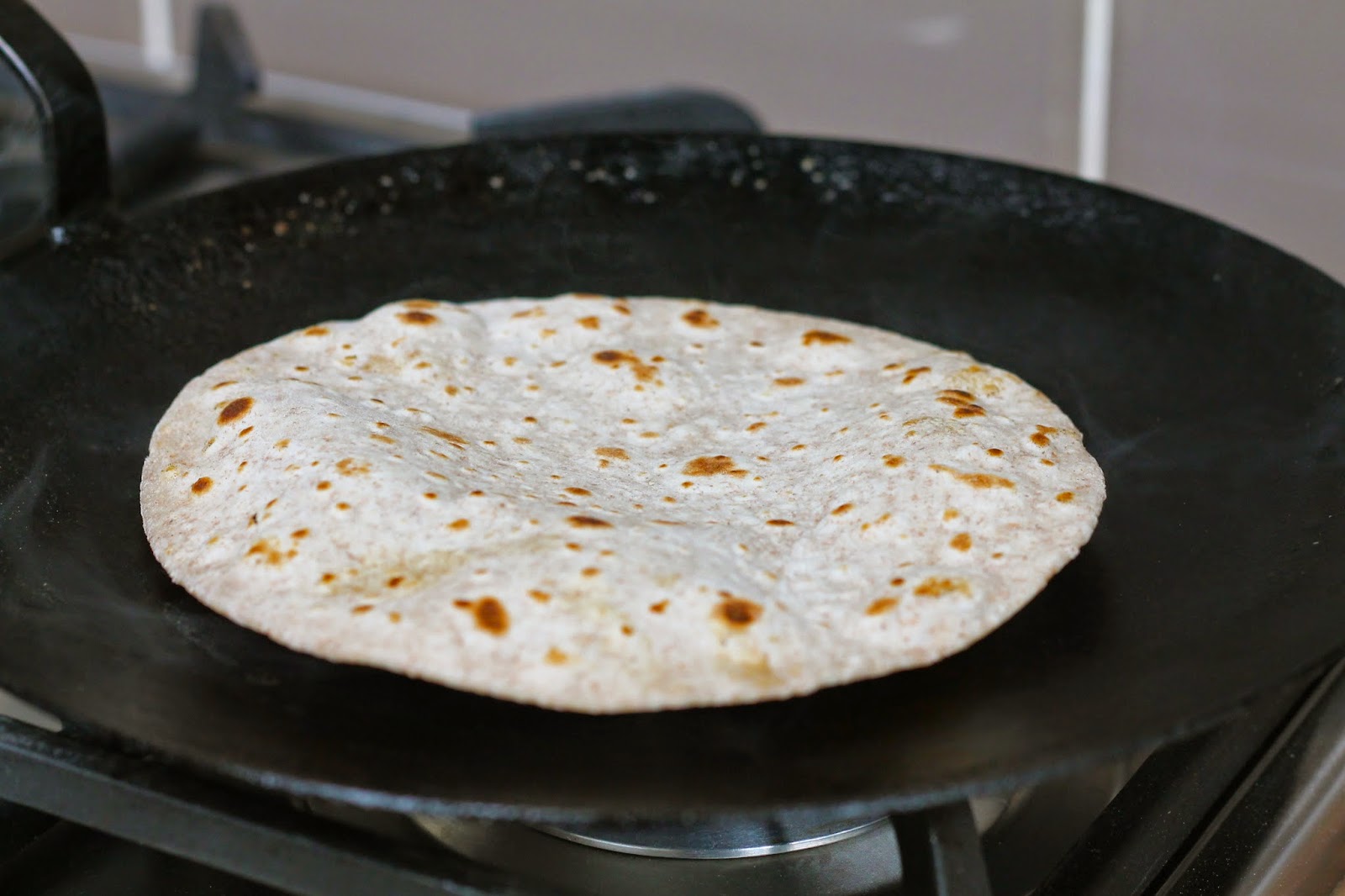 Using a cloth napkin bunched up in your hand, lightly press down on parts of the roti to cook the underneath. As you do this, the pressure from lightly pressing down should encourage the parts not being pressed to puff up. As these parts puff up, press on them to encourage the rest of the roti to also puff up.  Once it has fully puffed up - this should take about 20 seconds from the time you flipped it over -  it’s cooked. If it doesn't puff up, don't panic, just keep rotating it on the spot until the underneath is evenly browned (again, about 20 seconds). 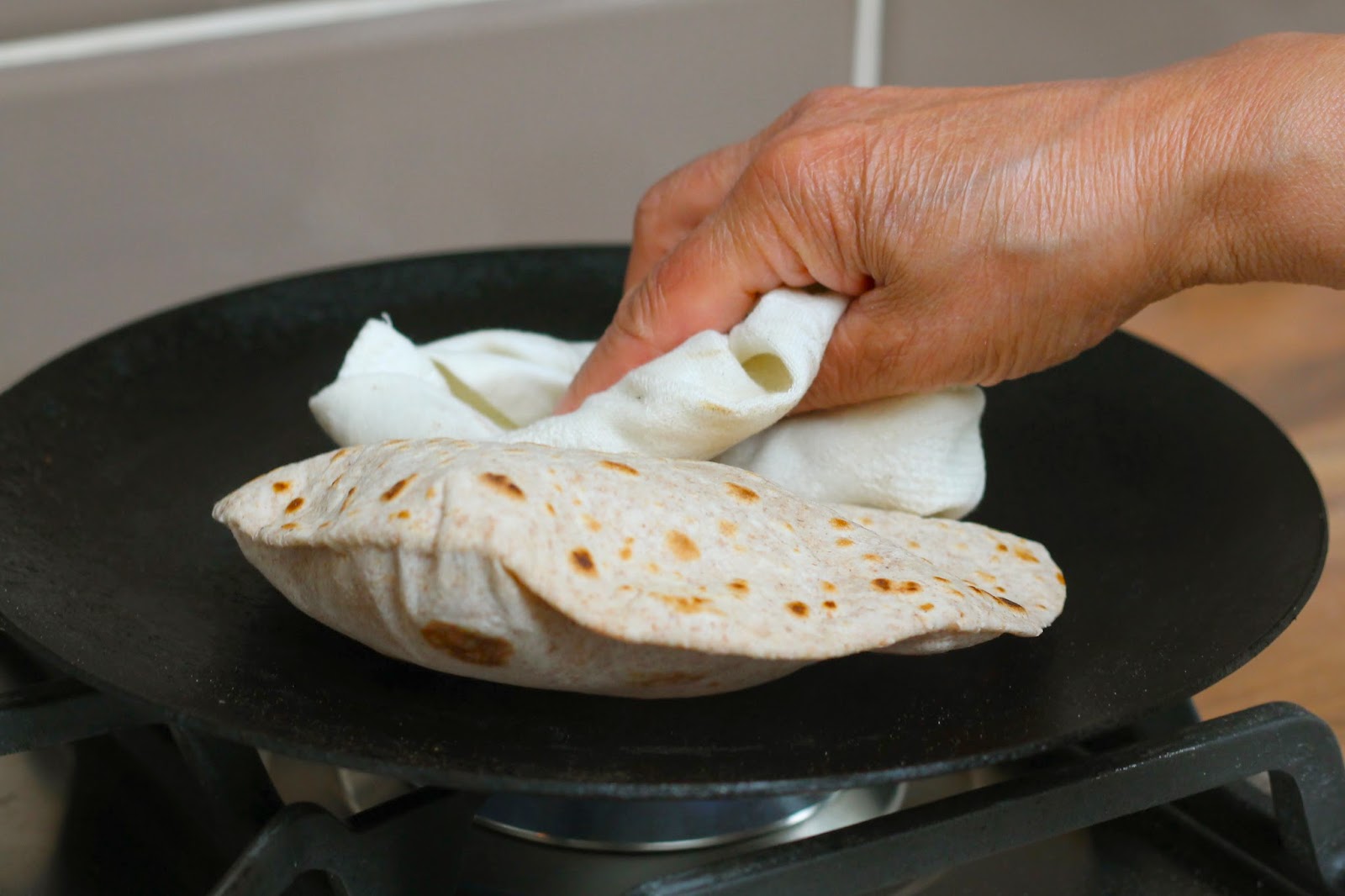 Remove from the tava and place in a bread basket.

Repeat with the remaining dough balls.  Once they are all cooked, start the process again until all the dough in your container has been used up.  As you get more proficient, you will find you will be able to roll out one roti whilst another is cooking on the tava.

Eat the roti whilst fresh and warm with curry or with butter and sugar (or how about some chocolate spread…?!)  Alternatively you can freeze the batch of roti until needed, reheating them from frozen either under the grill or on a dry frying pan or in the toaster (on a low-medium setting).
Posted by acupofteasolveseverything at 20:34