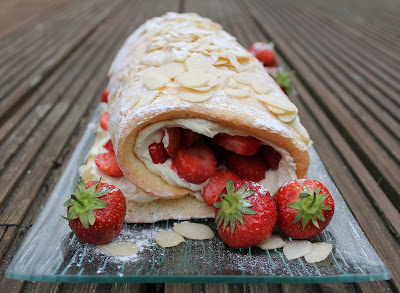 Yesterday I was lucky enough to spend the day on Centre Court at Wimbledon, watching the likes of Serena Williams, Andy Roddick, and yes, the man the whole nation is pinning its hopes on, Andy Murray smashing the ball with the same kind of vehemence and enthusiasm I reserve for eating chocolate cake.  I’ve always been entirely useless at sports myself; much as I dreamt of being a sports prodigy when I was a teenager, the fact that I was the kid picked last for every single sports event going soon made me realise my skills clearly lay elsewhere!  As such, I could only marvel yesterday at the sporting prowess of those I was watching.

Of course, when it comes to Wimbledon, I’ll be frank with you, my first thought is not really about the tennis and who I might get to see play, but the fact that I will get to eat strawberries with lashings of cream!  Strawberries, like all food, seem to be available virtually year-round nowadays, but it’s actually only during six or so short weeks - within which Wimbledon falls - that they are really in season and at their best.  So feeling inspired by my little jaunt to the All England Lawn Tennis Club, today I seized the opportunity to bake with these little jewels of berryness. 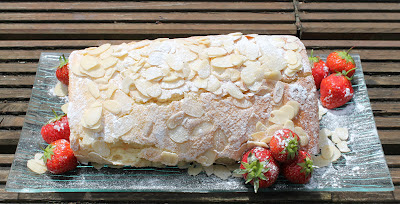 I make this roulade a lot, particularly for dinner parties, as it makes a great dessert.  Please don’t let the thought of having to roll the sponge put you off – honestly, it doesn’t matter if the end product doesn’t look like something Mary Berry has made, it will still taste lovely.  An added bonus is that the light and airy sponge is gluten-free, so if, like me, you have friends and family who are wheat-intolerant, it’s the perfect thing to whip up.


If I’m entirely honest, my favourite variation of this dessert is when I gently fold some lemon curd into the whipped cream and scatter raspberries on top before rolling the sponge, but, when in Wimbledon… 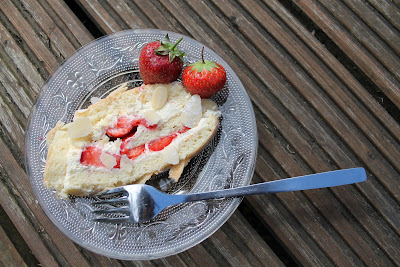 
Reserve 1 tbsp caster sugar for the egg whites.  Whisk the remainder with the egg yolks in a bowl until light and thick, then stir in the ground almond mixture.
Whisk the egg whites with the pinch of salt until just stiff, then beat in the reserved 1 tbsp of sugar.

Dollop a large spoonful of the whites into the almond mixture, giving it a good stir to loosen up the mixture, which will be fairly stiff.  Fold in the remaining egg whites carefully.

Turn the mixture into the prepared tin and sprinkle over half of the flaked almonds.  Bake in the oven for 12-15 minutes until golden brown and risen, then cool on a wire rack.

Dust a large piece of greaseproof paper with icing sugar.  Turn out the roulade into the paper.
Whip the cream until it just holds its shape and spread it over the roulade.  Cover the cream with the strawberries, then roll the roulade up and place it on a serving dish.  Decorate with the remaining flaked almonds.

(For my lemon and raspberry version, when assembling the roulade, fold a couple of heaped tablespoons of lemon curd gently through the whipped cream before spreading it over the roulade. Then zest a lemon evenly over the cream before scattering raspberries on top. Finish by rolling the roulade as normal and decorating with flaked almonds)
Posted by acupofteasolveseverything at 20:53