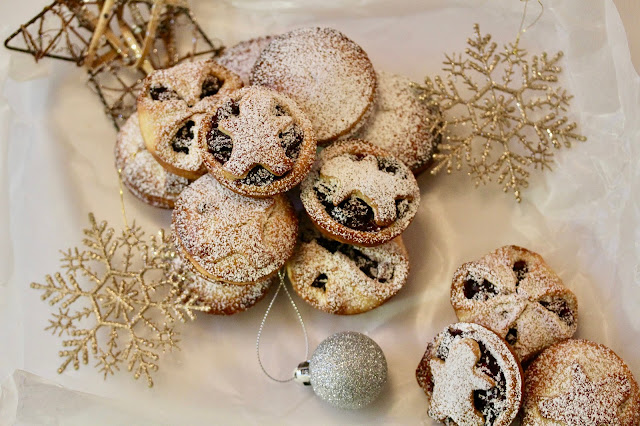 Ever think you’ve been given bum advice? Growing up, I was raised to play it safe when it came to a career: “Be a doctor or a lawyer or an accountant. All of the above, even! That way you’ll always have money and status and respect.” All the things that matter, obviously.

When choosing my A-level subjects, I was even told by someone that I should throw in Chemistry alongside English and my foreign language choices - the subjects I truly loved - just in case I saw sense at some point and decided yes, medicine was my true calling. I wilfully ignored this advice; indeed, I ignored all the aforementioned exciting career options, but I did nonetheless go for the staid, ‘safe’ option of a conventional office job. 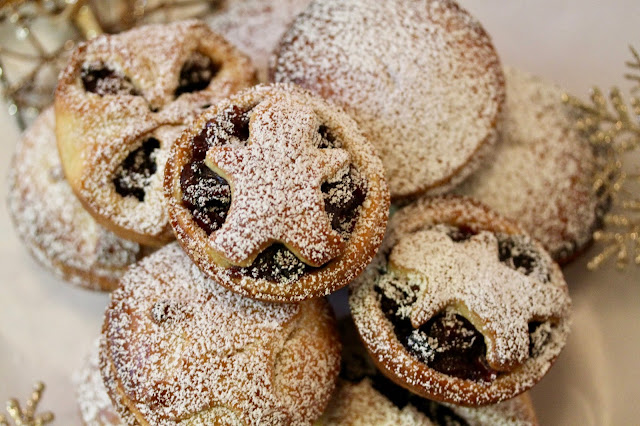 Recently I’ve become aware of other women who have been much braver than me and actually pursued their dreams so that they have careers that truly fulfil them, no matter the risk, nor for that matter, the lack of status and respect that supposedly come with being able to sue people or help clients find tax loopholes. One is a published writer; the other runs her own, very beautiful boutique B&B.

I don’t think I’d be much good at either of these two things, but gosh do I envy the women who are doing them. I envy them for having the guts to follow their dreams and believing in themselves enough to do it, for every time I even vaguely consider what I might really like to do with my life, that “play it safe and stick with a regular job” advice pops into my head to knock some risk-averse sense back into me. 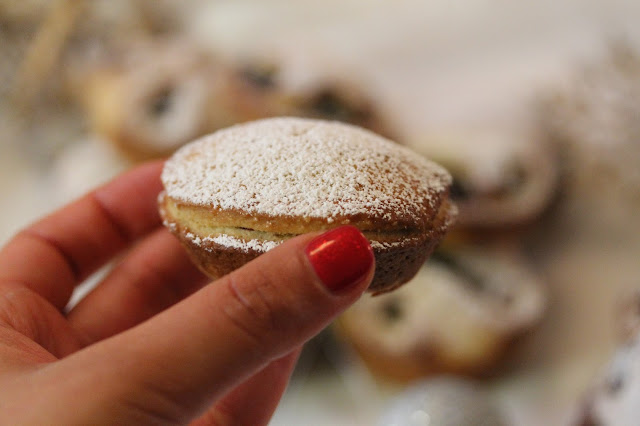 I tell you this because at a party a couple of weeks back, I took along a selection of homemade cakes for dessert and, unbeknownst to me, the professional caterers who were supplying the main course snuffled away a fair bit of said cakeage. I only became aware of this fact when they approached me at the end of the party to tell me that they loved my cakes so much, they felt I should go into baking professionally and would I be interested in working with them! Whilst Dr D tells me all the time that I should bake professionally, I still couldn’t quite believe it when I heard the same thing from the caterers. 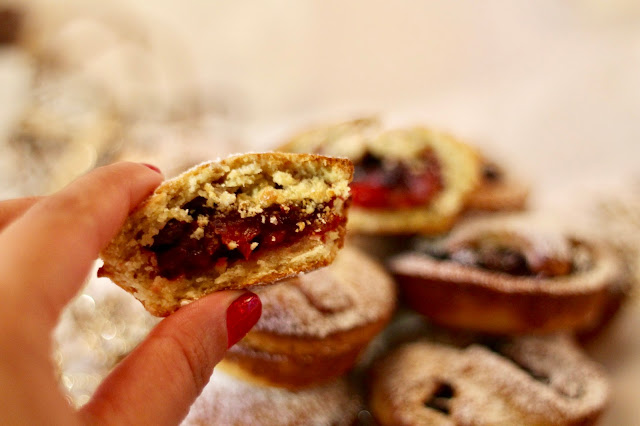 Whether I will be brave enough to take their (and my husband’s) advice remains to be seen. Maybe one day I will become like the writer and the hotel owner whom I admire so much and have the courage to pursue my dreams. Meanwhile, I shall continue to find happiness in baking for you and hope that you enjoy my recipes as much as the caterers did. Which leads me nicely onto these beautiful mince pies… 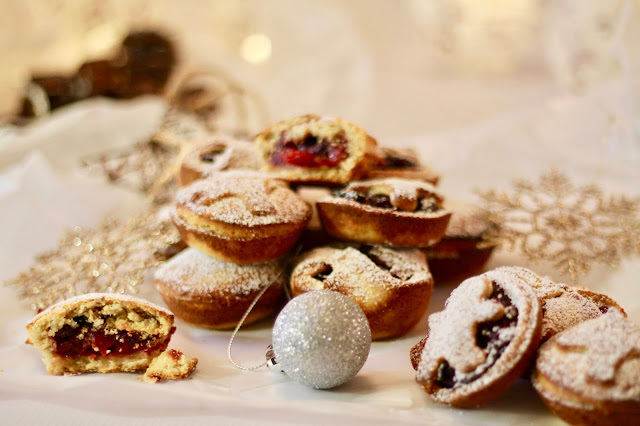 Every Christmas I say to myself that I will try making my own mince pies, especially as it’s not all that easy to come across decent vegetarian, alcohol-free ready-made ones. But then I get lazy and so the house remains pie-less.

This year though, I actually did it and, contrary to my expectations, they weren’t at all laborious or time consuming to make. The mincemeat took about half an hour in total, then I just popped it into a jar to develop in flavour for a few days. The pastry took about the same length of time and was surprisingly easy to make, coming out beautifully crisp and buttery. All that remained was assembling the pies, which I had a lot of fun with, making different shapes and decorations (instructions are given in my recipe). Well worth the couple of hours in total and ridiculously yummy. 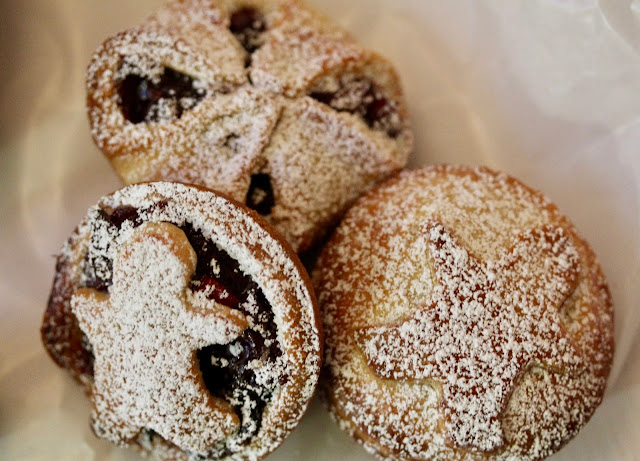 For the mincemeat (based very loosely on Nigella's Cranberry-studded mincemeat) - I'd recommend making this 2-4 days ahead of time, then store it in a sterilised jar in the fridge to allow it to deepen in flavour. To sterilise your jar, wash it in warm soapy water, then allow it to dry in the oven for a few minutes on a low temperature (about 120C fan):


Place the sugar and orange juice in a large, heavy-based pan over a low heat.

Once the sugar has dissolved, tip in the fresh cranberries and stir.

Allow to cook on a very gentle heat for about 10 minutes; as the cranberries start to soften, squash them with the back of a wooden spoon.

Add the spices, mixed dried fruit, juice and zest of the clementine and lemon, diced apple, butter and chopped nuts into the pan and stir.

Bring the mincemeat to a simmer and leave to cook for about 20 minutes or until the fruit has broken down and absorbed most of the liquid. Stir every now and then to ensure the mixture does not stick to the bottom of the pan and whilst stirring, continue to squash the fresh cranberries.

Once cooked, remove from the heat and allow to cool for a few minutes, then add the almond and vanilla extracts and the honey and give one final stir.

Store the mincemeat in your sterilised jar in the fridge until ready to make the pies.

For the pastry (adapted slightly from Dan Lepard's mince pie pastry recipe from Short and Sweet):
Sift the flour, baking powder and sugar into a large bowl.

Add the cubes of butter and with your fingertips, gently rub the flour and butter together until you have a lump-free sandy mixture.

Tip the cream cheese, ground almonds and egg yolk into the bowl and with a blunt knife, cut through the ingredients to bring them together a little. When it starts to all mix together and go clumpy, using your fingertips again, start rubbing the ingredients together again. I found that I couldn't rub in all of the yolk and cream cheese completely, but this wasn't a problem, the clumps all soon combined to form one soft, smooth ball of dough.

You shouldn't have to knead the dough, but if you find it is stiff (hopefully it won't be at all), you can add a very tiny amount of milk to soften it and gently knead the dough briefly to combine it with the milk.

Wrap the dough in clingfilm and chill for at least 30 minutes.

To make the pies (the fun part!)

I worked with half of the pastry at a time, keeping the other half wrapped in clingfilm in the fridge.

On a dry, clean work surface roll out the pastry to about 3mm thick. I rolled mine out onto a silicone baking sheet, which meant I didn't have problems with it sticking.

Generously butter the pockets of a muffin tray (shallow or deep - I used one of each and found both worked well).

If you want round pies with proper lids, you will need a 7cm and an 8cm round pastry/biscuit cutter. Using these cutters, cut out as many 8cm and 7cm discs as your pastry allows - but ensure you have equal quantities of both sizes. You may need to re-roll leftover clumps of pastry to get as many discs out of it as possible. Scroll down to the bottom for instructions of different pie shapes (including if you don't have cutters).

Place the 8cm discs over the buttered muffin pockets and gently push them down into the pockets, then fill with mincemeat. I was cautious with mine, only filling them to about three-quarters, for fear that the juice of the mincemeat would bubble out and/or burn when baking, but actually I found this didn't happen at all and that I could have been more generous with the filling, so personally I would fill the pastry as much as possible if following this recipe.

Next, brush the rims of the filled pastry cases with water or egg white and cover with the 7cm discs, gently pinching the edges to seal the lid to the cases.

Poke a small slit into each lid with a sharp knife, to allow steam to escape during baking.

Repeat the process with the other half of the pastry still in the fridge until you've used it all up.

Bake the pies on the middle shelf of the oven for 15-20 minutes, until lovely and golden.

Allow the pies to cool in the muffin tray for five minutes before removing from the tray and placing on a wire rack to cool completely. If you find that the pies are a bit stuck in the muffin pockets, run an offset palette knife around the rim before gently prising them out with the same knife.

If you don't want a round pie lid, instead of 7cm discs, you can cut other shapes out of the pastry to place on top of the mincemeat, such as stars, Christmas trees, or like I did for some of mine, gingerbread men. Since these won't completely cover the pie or make it air tight, you won't need to cut a slit in the lid for steam to escape.

If you don't have round biscuit cutters, you can make mince pie parcels: Roll the pastry into a large rectangle, then gently place the whole rectangle over the muffin tray. Cut the pastry into squares just larger than the muffin pockets, then gently push each square down into its pocket and fill with mincemeat. Finally, bring all four corners of the square into the middle of the pie and pinch together, sealing with a little water or egg white. Again, you won't need slits in these parcels as there'll be gaps for steam to escape. You can watch a how-to video for mince pie parcels on BBC Food's website.
Posted by acupofteasolveseverything at 19:56