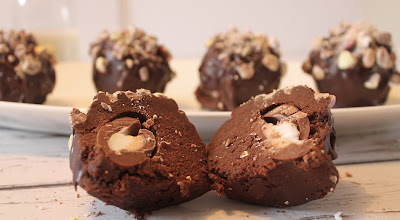 Twinny loves her Cadbury’s Creme Eggs. Boy, does she love them. Even after all the recent hoo-ha about the recipe being altered, the shell no longer being made of Dairy Milk (sacrilege), and consumers getting fewer eggs for their money, twinny remains steadfast in her adoration of the eggy wonder. 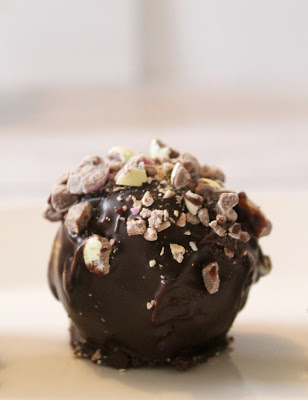 Let me give you an example. A couple of months back, I discovered that there was to be a temporary Cadbury’s Creme Egg pop-up café in London. Naturally, as a dutiful and caring sister, I promptly emailed the details to twinutha. Alas, due to prior engagements - for the most part, her day job cutting people open in order to save their lives - she was unable to make it to the eggstravaganza. Darn being a surgeon and it getting in the way of a good creme egg! And yet, never one to be deterred, she figured that if she was unable to get to the café, the café (or at least part of its menu) would come to her. 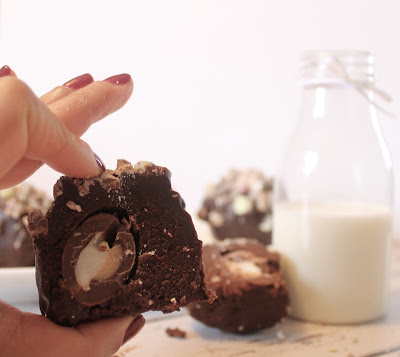 Having seen that the pop-up would be serving creme egg toasties (yes, you read that right), she promptly went out, bought a bag of the eggs in their diminutive incarnation, popped umpteen of them between two doorstep-thick, heavily-buttered slices of bread and made her own version of the toastie. So proud was she of her resourceful and her homemade creation, she even posted photos on Facebook, and twinny is rarely ever to be seen on the book of Face. 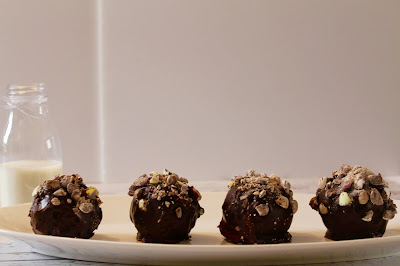 Needless to say, when I caught a glimpse somewhere on social media of the chocolate ‘Scotch eggs’ I’ve made for this post, with a mini creme egg at their core, the decree to make them was immediately mandated by my younger-by-one-minute sister. “No problem” I breezily replied, despite the fact that not only was there no recipe for the cakes, there wasn’t even any indication as to what their constituent parts were! 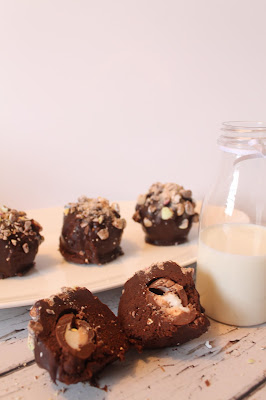 So I did a little bit of thinking (not too much mind; my brain doesn’t like it), and am pleased to say, reverse engineered my own version of chocolate scotch eggs: a chocolate sponge, broken down into crumbs after baking and combined with a chocolate cream cheese frosting (preferable to buttercream in this instance as it’s far less sweet, thereby serving as a better counter to the cloying clagginess of the creme eggs). The cake and frosting combination is subsequently moulded around a creme egg into a ball, chilled for a while, and then dunked into a glossy chocolate ganache before being ‘breadcrumbed’ with some crushed mini eggs. 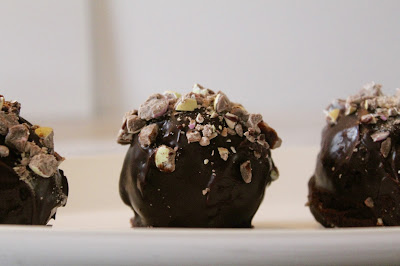 I have to say that I’m pretty pleased with myself for how well these turned out, given that I was more or less making them up as I went along. If you need any incentive at all to make them, may I add that the feedback I got from everyone who tried them was stupendous. They really were a hit, even with people like my brother, who doesn’t usually go for rich chocolate desserts and cakes; I think they’d be a great Easter present should you be so inclined. They were also a lot of fun and really quite easy to make. Most importantly, they got the twinny seal of approval. And if twinny is happy, I am happy!

For the chocolate sponge:
For the chocolate cream cheese frosting:
For the ganache:
You will also need:
To make the cake:
Preheat the oven to 190C (170C fan) and grease the base and sides of a 9" square cake tin before also lining the base with greaseproof paper.

In a large saucepan, heat the butter on a medium to high heat until it has all melted and is starting to foam and bubble a little. At this point, take it off the heat, add in the cocoa powder and whisk well to combine.

Return the saucepan to the heat and add the coffee, giving it all a quick whisk to combine. Bring the mixture to a boil, then remove from the heat.

Now add the flour, sugar, baking soda and salt and whisk together until you have a smooth, thick batter.

Leave to cool for about five minutes.

Once cooled, add the eggs, buttermilk and vanilla extract into the saucepan and give it all one more vigorous whisk to combine.

Pour the batter into your cake tin and bake for 23-25 minutes, or until a knife/skewer inserted into the middle comes out clean. Remove from the oven and leave to cool completely.

To make the frosting:
Beat the cream cheese and the butter together, either in a stand mixer using the k-beater, or with a handheld whisk, on a medium to high speed. Beat for a good 3-5 minutes until you have a light and creamy consistency.

To make the ganache:
Note that I would suggest you do this when you are ready to coat the eggs, not before as you will need the ganache to be runny so that you can dunk the eggs in it. The longer it has to sit, the thicker it will become, making it un-dunkable (though it can be heated gently to melt it again).

Heat the cream in a saucepan on a medium heat, bringing it just to the boil.

Whilst the cream is heating, place the chocolate chunks and slab of butter into a large bowl.

As soon as the cream comes to the boil, remove it from the heat and pour it over the chocolate and butter. Allow to sit for one minute.

With a spatula, whisk or wooden spoon, stir the cream, chocolate and butter together, until to you have a beautifully glossy, silky ganache.

To assemble the 'eggs':
Remove the cake from it's tin and break it into four or so large pieces in a large bowl. Use a palette knife or your fingers to then crumble the cake up completely.

Once you have a large bowlful of cake crumbs, tip in the cream cheese frosting and stir it into the crumbs with a large metal spoon, or again use your hands to mix, until the frosting and crumbs are well combined.

Place a baking sheet next to you, along with the mini creme eggs.

Now take a large handful of the cake mix (about two tablespoons' worth). Place a mini creme egg on top and then use your hands to mould the cake mix around the egg. Squeeze it fairly firmly between your two palms to get a compact, round egg shape. Place on the baking sheet.

Continue to make the eggs until you have run out of the cake mix, then place the baking sheet in the fridge, allowing the eggs to chill for at least an hour.

Once the eggs have chilled for a sufficient time, one by one, dunk them in the bowl of ganache, turning them with a large spoon if necessary to coat all over. Use two large spoons to pull the coated egg out of the bowl and place it back on the baking sheet.

Sprinkle with some of the crushed mini eggs.

Repeat with each of the scotch eggs until they're all coated and 'crumbed'. If the ganache starts to become too thick for dunking during the process, stick it in the microwave for just a few seconds to warm it up and get it runny again.

Once all of the eggs are complete, place in the fridge for four to five hours (or overnight) to set.

Remove from the fridge about an hour before serving ideally, although they can also be eaten fridge-cold.

PS If transporting them, you could do what I did and place each egg in a muffin case to avoid them getting bashed about.
Posted by acupofteasolveseverything at 17:45