Last week Dr D and I visited one of my favourite chocolate and patisserie shops, William Curley, to indulge in an experience the chocolatier offers customers called the ‘Dessert Bar’. The Dessert Bar is basically my idea of heaven. Instead of sitting down to a five course meal, of which one course at most is likely to be of the sweet variety, you get to sit down to five courses, all of which are sweet. That’s right. ALL. OF. THEM. Five courses. All containing sugary goodness. 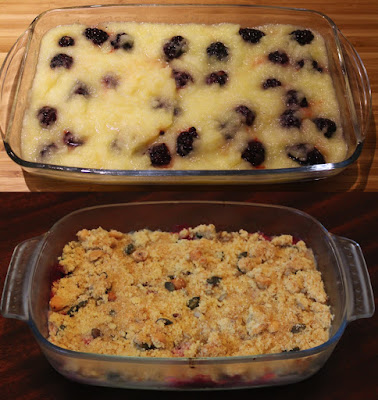 Now as any dedicated athlete would do, I took my training in anticipation of the dessert bar very seriously: lunch was foregone - heck so was breakfast that’s how committed I was to the cause; and I walked the seven miles there from home in order to really build up an appetite and make sure that every single morsel of dessert could be enjoyed when I finally arrived in an exhausted, famished, somewhat dishevelled heap a few hours after the start of my journey. 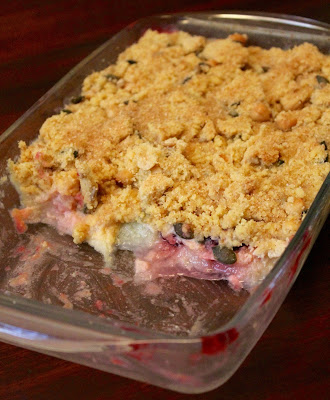 As it turns out, I perhaps didn’t need to have undergone quite such a gruelling training regime - though I’d like to think Mo Farah would be proud of my dedication - as each course was fairly small; gone in about three dainty teaspoons-full. I begrudgingly admit that this is probably rather sensible as we none of us would wish to end such a delightful experience in a diabetes-induced coma. As well as being on the petite side, a couple of the desserts were of the sorbet, granita or jelly variety so there was no danger of eating so much stodge that I turned into a pudding myself, albeit, given the opportunity, the ziggy-piggy in me would be willing to give it a darn good go. 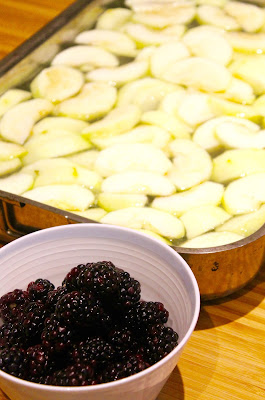 Anyhoo, the stand-out dessert for me of the five courses was a lovely pear and bramble crumble. It arrived ‘deconstructed’, which I know may irk some people, but the fact is, if it hadn’t already been, it was only going to meet that very fate a few seconds after being placed in front of me. So what they hey, as far as I was concerned, it just made shovelling the delicious, caramelised, fruity wonder into my mouth all that bit easier. Now, as it so happens, my mum, more commonly known by her rapper's name, K-Dub, is famous in my family for her apple crumble and I very recently finally found the time to get the recipe from her and make it myself. I made mumma’s recipe again a few days back, and I’ll be honest, it’s so good, it doesn’t really need to be tweaked with. But I couldn’t help myself.
So this time I decided to brown the butter for the apples before throwing in the sliced fruit, making the compote more nutty and caramelised in flavour. I also added blackberries, a favourite of Dr D's, into the mix once the apples had cooked down. The bigger tweaks though were to the crumble, to which, inspired by the one I tried at William Curley, I added hazelnuts and seeds for a more varied taste and texture. Finally, I chose to bake the crumble topping twice for extra-crunchy crumbliness: once on its own on a baking sheet; the second time after it had been scattered over the compote. This might seem like extra effort, but honestly, I think it's worth it as the resulting crumble is deliciously crunchy and crispy. It’s even received a  thumbs up from K-Dub herself, which means it must be good!
Adapted from K-Dub's famoso apple crumble
Ingredients
Serves 8-10

Put the butter and sugar in a large saucepan or large, deep frying pan and melt together over a medium-low heat. Heat for 3-5 mins until the mixture turns to a light caramel - it will start to bubble and foam and let out a sweet, nutty aroma. At this point, add the apples. Don't worry if some of the water they are in goes into the pan too, it will help to stop the compote becoming too thick or dry.
Mix the apples in the butter and sugar mix, making sure they're all coated, then add the lemon zest and cloves, place a lid on the pan and cook on a medium-low heat for about seven or eight minutes, Stir the apple slices about halfway through the cooking time to break them up a bit - the end result should be a squishy, lumpy compote, not still-in-tact apple slices. After 7-8 minutes of cooking, you should have a thick compote (the apple slices will have broken down), but it should have retained some of the liquid from the apples and not be dry. At this point, turn off the heat and take the lid off the pan to allow the apples to cool completely.
Once the apple compote is cool, fish out the cloves (I know!) and tip the compote into a large ovenproof gratin dish. Scatter the blackberries over the top.
Crumble topping:
Preheat oven to 180C fan.
In a large bowl, rub the flour and butter cubes together with your fingers until you have a breadcrumb consistency. Tip in the sugar, seeds and hazelnuts and stir through the crumble mix with a large spoon.
Spread the crumble mix out evenly over a baking sheet (or two if necessary) and bake in the oven for 10 mins.
Remove from the oven and use a large spoon to top over the compote. You may have large chunks of crumble - keep as they are, or break up as your spoon over the crumble, depending on your preference. Sprinkle a liberal amount extra demerara on the top of the crumble for extra crunchiness once it's fully baked.
Reduce the oven temperature to 160C and bake the whole crumble for another 15 mins if cooking straight away. If finishing the bake at a later point and you've had the unfinished crumble in the fridge, bake it for another 30 mins, or until the compote is bubbling and the crumble is nice and golden on top.
Posted by acupofteasolveseverything at 19:35