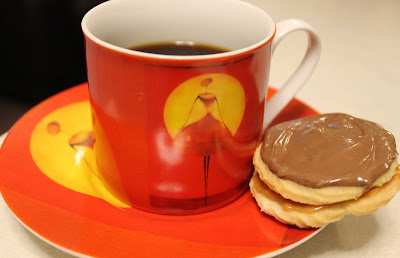 Given the focus of the 'A cup of tea solves everything' blog, it will come as no surprise to you dear reader, that when I go on holiday my focus remains, resolutely, food.  Even whilst I am still at home in London planning my holiday, you will find the 'Where to Eat' pages are the ones my Wallpaper guide automatically falls open to, and once I arrive at my destination of choice, my itinerary is usually based around the restaurants, cafes, tea rooms and food markets I want to check out.  Forget museums and historical landmarks, the local food drives my sight-seeing.

So when I got to go to Argentina and Brazil last September, I was excited.  Not just by the prospect of Argentinean steak (though seeking out the best local parilla was high on the agenda), but by the potential of a whole new world and culture of food.  One of my first discoveries in Buenos Aires was dulce de leche (literally translated as 'sweet milk').  Now I know that dulce de leche can be found in a certain make of ice cream here in the UK, so strictly speaking, it wasn't a discovery that I was making, but what was a discovery was just how many different foods it was found in in Argentina.  The stuff was everywhere - in cakes, in tarts, in biscuits, in ice cream, on toast.  I even saw people eating it on its own, by the teaspoonful.

One of the biscuits I found dulce de leche in was the Alfajor.  A very popular biscuit in Argentina - indeed, almost as ubiquitous as dulce de leche itself - the alfajor, or at least the Argentinian variation (apparently it is of Arabic origin and can also be found in Spain and across Latin America), is two sweet biscuits sandwiched together, more often than not with dulce de leche, though sometimes sandwiched with mousse or jam, and then coated in chocolate.  The biscuit is of a soft, crumbly texture - akin to that of a Viennese Whirl - which melts in your mouth.

When I returned from my holidays, I was determined to bake something using dulce de leche, so after paying through the nose for a tiny jar of the stuff from a well-known London food market (I've since realised that an easily-obtained, relatively inexpensive tin of caramel from your local supermarket will work just as well), I went about making my own alfajores.  I'm pleased to report that these bad boys have turned out pretty darn tasty (even if I do say so myself!) and they go down a treat with family, friends and colleagues whenever I make them.  Try them yourself with your mid-morning caffeine hit, you won't be disappointed.  In fact, you'll probably find yourself reaching for another... 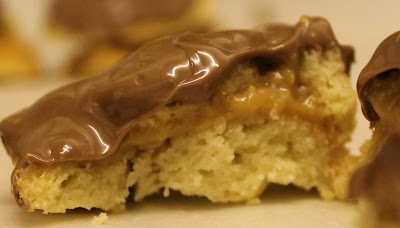 It's helpful to create a template of circles on a piece of card, which you can use to guide you when piping the biscuits so that they are all the same size - useful when it comes to sandwiching them together!  I used a cereal box, onto which I drew 12 circles approximately 5cm in diameter.

Cream the butter and icing sugar together until light and fluffy.  If using a freestanding mixer, use your K-beater attachment and beat for about five minutes.

Sift the cornflour and plain flour together, then add to the butter and sugar mixture and beat further until smooth and light.

Spoon the mixture into a piping bag.  If you can, use a canvas piping bag for this as the mixture can be stiff, requiring firm pressure when piping.  I found when I used a nylon piping bag, the pressure from my hands warmed up the mixture and made the butter in it melt through the seams of the bag.  Don't worry, the biscuits still turned out nice, but a canvas bag prevents this from happening!

Place your cardboard template underneath the parchment paper on one of the baking sheets and use the circles as guidelines for piping your mixture into swirls onto the parchment.  Repeat with the remaining baking sheets.

Bake for 12 minutes, or until the biscuits start to turn a nice golden colour, then remove from the oven.  Allow them to cool on the baking trays for a few minutes before transferring the biscuits onto a cooling rack (if you try to transfer them while they are fresh out of the oven, they will fall apart.  I speak from experience).

Once the biscuits have cooled, sandwich them into pairs with a generous layer of dulce de leche/caramel, which you can spread on gently with a palette knife.

Finally, melt your chocolate either in a bain marie (break the chocolate into pieces and place in a bowl.  Set the bowl over a pan of simmering water, making sure the bottom of the bowl does not come into contact with the water.  Stir the chocolate slowly.  Remove from the heat once it has melted), or in short bursts in the microwave.  Using a palette knife, spread generous amounts of chocolate over the top of each biscuit and leave to set. 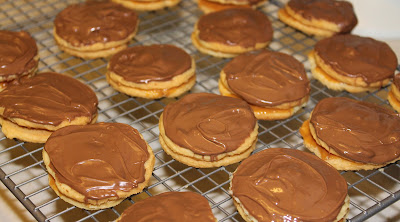